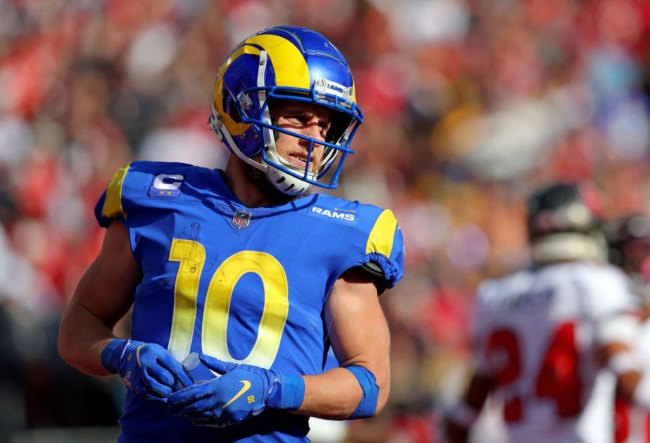 The vast majority of professional athletes, especially those at the top of their respective sports, are looking for the biggest paycheck imaginable. Year after year we hear about NFL players holding out for more money, but that doesn’t seem to be the route Rams’ WR Cooper Kupp will take in the future.

Kupp led the league in receptions, receiving yards, and receiving touchdowns last season. He’s signed thru 2022 with a potential out in his contract in 2023, and it goes without saying that he’s due a massive payday with his next contract.

Kupp very well could become the highest-paid wide receiver in the NFL, but he’s not worried about topping that list.

The former third-round pick was asked if he wants to be the highest-paid wideout in the league and gave one of the most down-to-earth answers imaginable.

Kupp’s mindset is quite literally the complete opposite of other top players around the NFL. Last year’s Super Bowl MVP clearly isn’t worried about having the biggest paycheck among wideouts, he wants to play for his desired franchise and the rest will work itself out.

Not to be dramatic but I’d die for Cooper Kupp https://t.co/I4FzQzNuX5

Interesting to see a guy who knows he’s in a good situation and is willing to make it work to stay there https://t.co/UYyqwdCTmc

He’s saying all the right things. Absolute “We Not Me” but definitely deserves the new deal that’s coming 🤘🏻 https://t.co/viJsgn3G4j

Definitely respect that! That ony comparison you should make is to be a better you! https://t.co/zGOBABv2Ma