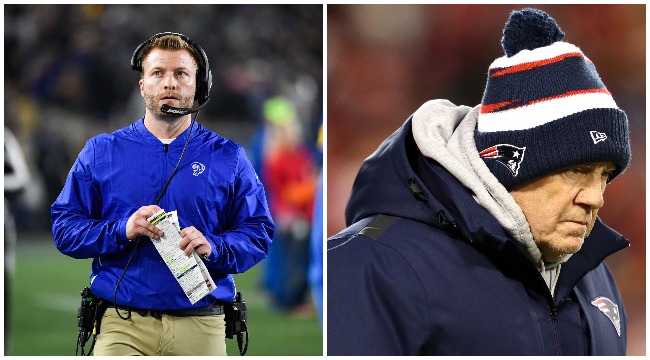 At first glance, Sean McVay and Bill Belichick could not be any different. Belichick, 66, is literally twice as old as the newly 33-year-old McVay. McVay wears hair gel, Belichick wears cut off hoodies. McVay is spirited and emotional, Belichick does not possess the ability to feel human emotion. On the surface, I’d expect being in an elevator with the two of them would be as awkward as being confined with an NFC Championship referee and a New Orleans resident.

In a recent profile of Sean McVay by Pro Football Talk’s Peter King, the second-year Rams head coach dished on his special relationship with the legendary Patriots coach and their constant interaction throughout the season.

“He was really great in the conversation we had, really enlightening. This is wild: This season, he has basically texted me after every one of our games. After we beat Minnesota in September, he texted, ‘Man, you guys are really explosive and impressive and fun to watch. Congratulations—keep it rolling.’ For him to even take the time to say congrats, it’s pretty cool. That’s one of the things I like about our business, our fraternity of coaches. As competitive as it is, guys find time to share when they can. I’m still young, still figuring it out. That stuff’s been really helpful to me.”

McVay also recalled getting up close with the Patriots back in 2014 when he was an offensive coordinator for the Redskins. It was just a training camp practice, but the experience stuck with him.

“This is something that I haven’t said to anybody really other than some coaches. But it really gives you an appreciation for just the experience factor of the Patriots. My first year as offensive coordinator, Jay’s first year as the head coach in Washington, 2014, we practiced against the Patriots in training camp. I remember watching their operation. The efficiency … not a single minute wasted. When we would have the special-teams period—every single player with the Patriots, if you’re not involved with an urgency in special teams, the offensive coaches and defensive coaches had their own individual drills set up where they’re maximizing every minute. If you knew nothing about football—not a thing—and you just watched them, you’d say, ‘There’s something different about that team.’ A well-oiled machine. You’re just thinking, ‘This is the team we gotta compete with, man. We gotta get to their level.’

“That was the only time I had gotten that exposure. I knew this: That’s what it looks like when it’s done right.”

This week I can guarantee there’s no text messages going back-and-forth between the two. Belichick’s been sitting in a dark room mixing up a magic potion while staring at a wall since the end of the AFC Championship game.