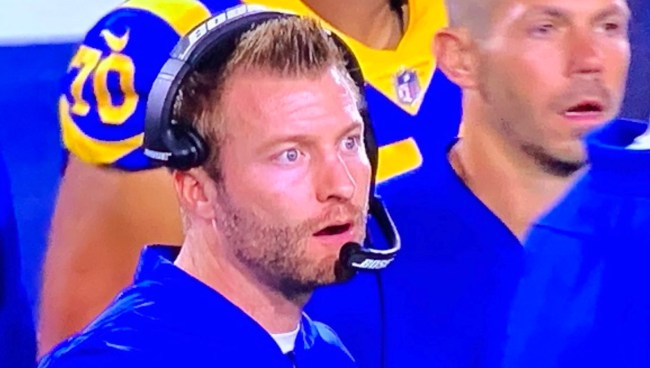 The fact that the Los Angeles Rams have now lost two games in a row in which they were favored shocked many an NFL fan after they lost 30-23 to the Eagles on Sunday.

Especially considering that those two losses included only scoring six points versus the Bears and then losing to the Eagles’ backup QB backup Nick Foles.

Throw in the fact that Jared Goff, who looked like the next coming of Dan Marino through the season’s first 11 games has now thrown for zero touchdowns and six interceptions in the two losses.

So, it’s very understandable that someone as close to the situation as Rams head coach Sean McVay would be a little bit shell-shocked.

And at no point during the last two losses was McVay more stunned than he was when his Rams fumbled (and lost) a punt while down by just a touchdown with three minutes left in the game.

damn, she bout to wreck your life bro…. @seanmcvayfaces

The McVay face is officially a thing now. pic.twitter.com/yYc4LcML7O

Sean McVay being told The Coliseum will switch from Coke to Pepsi next season. #ramsvseagles pic.twitter.com/pkR2yd8jbs

McVay when he has to see Foles again in the first round of playoffs pic.twitter.com/flD9hneJXz

If Sean McVay has such a good memory then ask him what happened the last two times he played the Eagles pic.twitter.com/OlIOcdHdKv

When you're Sean McVay and someone captures a screenshot of you reacting to something pic.twitter.com/wYHz73gjcm

Sean McVay mic’d up after Natson’s fumble on the punt return 😭 pic.twitter.com/L8GWKaBTIQ

@eagles Sean McVay’s face during that fumble on the kick return: pic.twitter.com/ItbiliOcAd

@LeBatardShow I think this is right up your alley. Sean McVay looks like a Bitmoji. Might be a human Bitmoji. Don’t make me include something about how bad your show is to get you to acknowledge this. pic.twitter.com/Rz4Nhryjih

me looking at all the annoyed McVay face pics right now pic.twitter.com/5Fcw24p7cI

In a meme battle who wins, homie in the back with his jaw on the floor or the silent death in Sean McVay’s eyes?? pic.twitter.com/oKXgoeE30M

I could write a book on Sean McVay facial expressions. And if I did, it’d be the greatest thing I’ve ever accomplished. @seanmcvayfaces