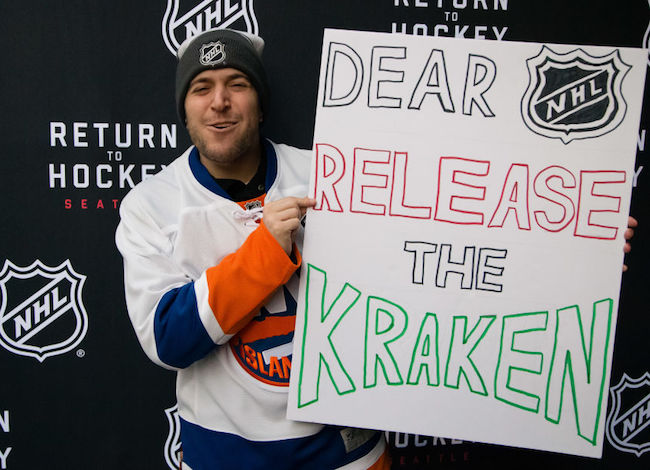 It’s been two years since the NHL revealed a group of investors led by billionaire David Bonderman and comically large explosion connoisseur Jerry Bruckheimer had earned the privilege of becoming the owners of the league’s 32nd franchise,

We soon learned the unnamed team will play in the Pacific Division of the Western Conference when it kicked off its inaugural season when 2021 rolls around, which will result in the Arizona Coyotes moving to the Central Division. That move makes about as much sense as the Dallas Cowboys playing in the NFC East, but whatever. These things basically stopped mattering when the Big Ten added an eleventh team and just didn’t bother changing its name.

As soon as people heard about the existence of the Seattle Unnamed Hockey Team, they immediately began to speculate about what it would ultimately be called. Since then, a ton of different potential monikers have been floated, including Sockeyes, Seals, Sirens, Pilots, Sea Lions, Rainiers, and Firebirds (as well as my personal favorite: the Rain City Bitch Pigeons).

A few months ago, a report was released which seemed to all but confirm that the team would be named after the Kraken, the legendary tentacled behemoths known for roaming sailor’s nightmares and the seas they’re rumored to patrol. The Twitter account associated with the franchise only added to the frenzy by posting cryptic messages but declined to confirm or deny the rumors.

However, that all changed at noon on Thursday shortly after someone presumably uttered these immortal words to whoever runs the team’s social media.

A legend from the deep awakens.

My initial reaction? Hell yeah. I give the name a solid 8/10 and the logos and color scheme are just awesome.

The NHL's newest team is the Seattle Kraken.

Grade the logo and look. pic.twitter.com/weMqI0owvV

I love the combination of the light and dark blue and the touch of red makes for the perfect accent. I’m also digging both of the logos; I’m feeling the tentacle in the middle of their primary and mashing up the Space Needle with an anchor is super creative. To top it all off, the jerseys look phenomenal. I can’t wait to see a full uniform because I’m sure it will be spectacular. I might even need to buy some Kraken merch once it becomes available.

It’s cool to see the team’s historical ties to the city as well, as the new primary logo is a clear tribute to the one used by the Seattle Metropolitan—the first American hockey team to win the Stanley Cup and they’d secure four more before folding in 1924.

My favorite thing about the logo is that it's a "Kraken-zied" version of the Seattle Metropolitans logo. pic.twitter.com/nlll9TV4tG

Want some more history? Well, Darren Rovell also does that thing he does and found…the first time Kraken was used in a newspaper in Seattle? Jesus, man. Who hurt you?

Seattle hockey team will be called the Kraken after the Loch Ness monster like sea creature. First mention of the Kraken in Seattle was in October 1884. pic.twitter.com/CJDd2UFPJ8

Because of the current situation, there’s no telling if the Kraken will really play their first game in 2021 or not, but either way, I look forward to the team’s inaugural season and all the expansion draft drama that will come with it.