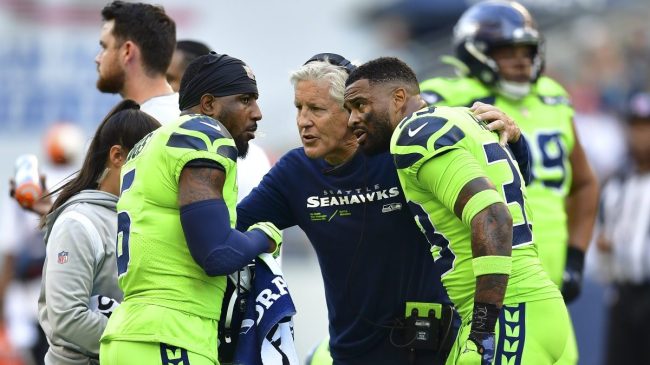 The fun lasted less than a week for fans of the Seattle Seahawks. The Seahawks, of course, opened the 2022 NFL season with an exhilarating win over the Russell Wilson-led Denver Broncos.

Wilson’s replacement, Geno Smith, dazzled Seattle fans and stole the show before Broncos coach Nathaniel Hackett took the spotlight right back with a mind-numbing decision to kick a 64-yard field goal with 20 seconds left on the clock.

Hackett has since walked back that decision. But the Seahawks won’t be giving back the victory, especially not head coach Pete Carroll.

But not everything went Seattle’s way during the game. Seahawks Pro Bowl safety Jamal Adams limped off the field late in the first quarter after trying to track down Wilson on a blitz.

Adams did not return to the ball game and was later to revealed to have suffered a quadriceps injury. Carroll said Wednesday that Adams would seek additional opinions on the injury before making any decision.

Those opinions don’t appear to have been positive.

Sources: #Seahawks star S Jamal Adams will have season-ending surgery to repair his torn quad tendon suffered against the #Broncos, his 2022 over as he’s headed to IR. Adams is still talking to doctors about the timing of the procedure, as well as who performs it. pic.twitter.com/z6b7K8iCZx

The injury is a devastating blow to both the 26-year-old three-time Pro Bowler and the Seahawks. Adams appeared in just 12 games in 2021, but he racked up 87 tackles to go along with a pair of interceptions.

He’s a huge part of a defense that allowed just 21.5 points per game, which ranked ninth in the NFL. Adams’ 87 tackles ranked fourth on the team.

Seahawks fans were devastated by the news.

Keep your head up @Prez. You give your health and life to this game. #Seahawks nation is behind you. Praying for a successful surgery and a healthy recovery. https://t.co/r9L5SyHD8P

This hurts because Jamal is a hell of a player. I hope for the best and a speedy recovery @Prez . 12's be patient with him, how this injury happend was a perfect example on how impactful Prez is for the defense. He plays fast and hard. Can't wait to see him back out there. https://t.co/WpFPYeS63Q

I’m so bummed for Jamal. He’s had just an awful streak of luck. Dude has the heart of a lion. He will be sorely missed. #seahawks https://t.co/U6u4omAj6m