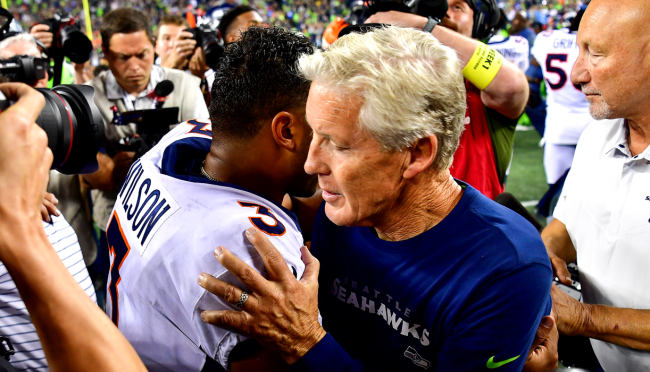 This past offseason, after 10 great years in Seattle with the only coach he’s ever had in the NFL, Pete Carroll, Russell Wilson departed for Denver after some teammates said he “checked out” mid-season.

They didn’t have to wait very long to meet back up with one another though as the Broncos and Seahawks hooked up in Week 1 of the 2022 NFL season.

Denver and Wilson entered Monday night’s game as a 6.5 point favorite over Seattle.

They left Monday night’s game with an 0-1 record after losing 17-16 to Carroll and his new quarterback Geno Smith.

Smith actually ended up outplaying Wilson, throwing two touchdown passes to Wilson’s one and ending the game with a 119.5 QB rating vs. Wilson’s 101.3.

The Broncos still had a chance to win at the end of the game, but new Broncos head coach Nathaniel Hackett’s decision to pull his new $242 million QB off the field in favor of a 64-yard field goal attempt failed.

Pete Carroll talked about what it was like, and what it meant, to beat Russell Wilson and the Broncos

“I didn’t need the validation,” Carroll told ESPN 710 AM Radio host Mike Salk on Tuesday. “I just wanted to win. I just wanted to win for all of the reasons that come along with this one. Maybe as much as anything is representing the guys that have played before. It meant a lot to those guys. I was so thrilled to be able to hug those guys up and see them and look them in the eye.

“It was really meaningful and they really wanted it and I knew we were playing for a lot more than just the regular stuff. We have a real connection with the history.”

Carroll continued, “They feel it and they love the fact that they played here and they love seeing us do well. On this night, they realized there was a big opportunity and a big statement to be made. The game isn’t about an individual player here or there. It’s about team. This is the ultimate team sport and it’s been stated so many times before. It takes everybody and sometimes when so much focus goes… it just, you know, it just rub you guys wrong I guess or whatever, but I’m thrilled that we won that game.”

I don’t know… it sure sounds a lot like someone is feeling pretty validated after the victory.

Interestingly, in the post-game media scrum after Monday night’s win over Denver, Pete Carroll was asked if part of him feels validated after beating Russell Wilson.

Didnt play well enough to win. And they paid 48m for him to win.