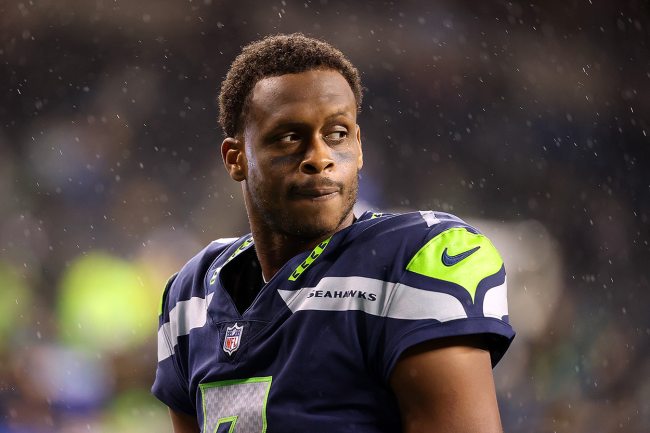 The Seahawks, to the surprise of many — if not most — did not draft a quarterback through the first 150 picks of the NFL Draft. Despite opportunities to take Kenny Pickett, Malik Willis, Matt Corral, Bailey Zappe and Sam Howell, the team went in another direction each time.

That decision in itself was a clear statement about Seattle’s future at the position. Although there were other quarterbacks available in the later rounds, none are considered to have the immediate potential to start.

As a result, the Seahawks are set to proceed into the summer with what will be a two-man quarterback battle. Seattle traded Russell Wilson to Denver during the offseason and received Drew Lock in return.

Lock will have to compete against incumbent backup Geno Smith for the top spot on the depth chart. One of those two guys appears to be in line to start next fall.

It appears as though the veteran Geno Smith has a leg-up on the newbie Drew Lock.

While speaking to reporters on Friday night, head coach Pete Carroll revealed that one of the two quarterbacks is already ahead in the race. There is a lot of time left to make a decision, but if one had to be made today, it would be in favor of Smith.

“The competition is underway,” Carroll said. “Geno has come in and is obviously ahead going in because he’s had all the background with us. He’s been with us for a number of years. He leads the charge right now. He’s in command of our system as much as a guy could be.”

Even though Smith is in the lead for Seattle, Carroll said that he and his staff have done their homework on Lock to ensure that the right guy gets the job in the end.

“We’ve been able to see Drew in great depth. We’ve seen everything,” Carroll said. “We went all the way back to all his college days and everything else. Every throw he’s ever thrown to show us what he’s capable of doing. We’re fitting it together. It’s going to be a really strong, competitive group and we’re going to be smart.”

Whether it ends up being Smith or Lock at quarterback, it doesn’t sound like the Seahawks plan on competing for a Super Bowl in 2022.