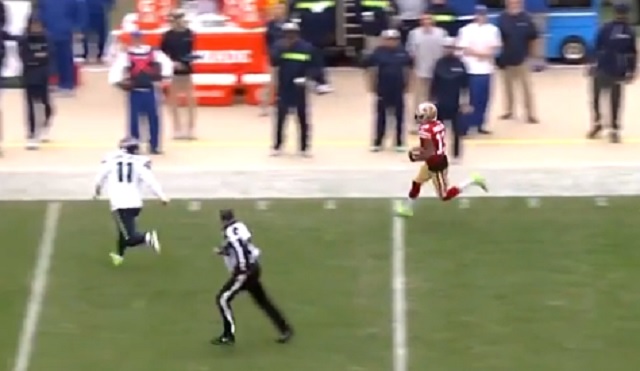 Seahawks kicker Sebastian Janikowski had a good shot at stopping James during the TD run but Seabass decided to make a business decision and hilariously got out of the way instead going for the tackle.

Of course the Internet had jokes about Janikowski’s terrible tackle attempt.

Sebastian Janikowski with a heck of a business decision.

Sebastian Janikowski has made one tackle since the start of the 2010 season. Not about to start now.

Janikowski approached his last-line-of-defense duties like most people approach NY resolutions… I should probably do something positive cause people expect it, wait nah I’M OUT pic.twitter.com/Nadr4qJGMt

LMFAO @ Janikowski’s fat ass on that play. Put in as much effort as he does in the gym….. #Clearly 😂😂