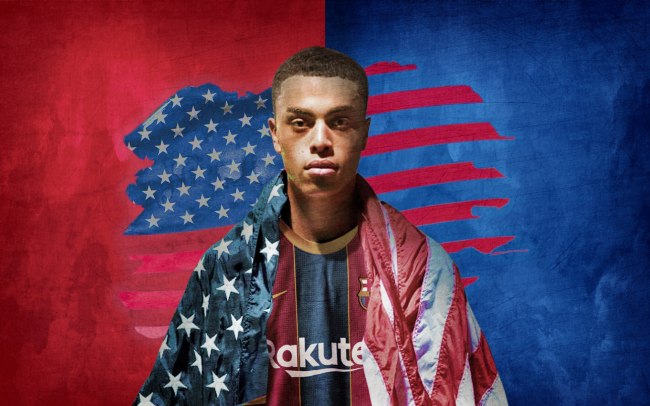 WE. ARE. ON. THE. COME. UP. LADS. 2026 World Cup in the United States, let’s fucking GO BABY! Home-field advantage? Check. Best crop of talent America has ever had? Check. 27-year-old Christian Pulisic playing like the best player in the world? Check. Folks, if your local bookie or sportsbook will allow it, I’d place a futures bet on the 2026 United States Men’s National Team to win the 2026 World Cup NOW.

This morning, Barcelona made it official that they’ve signed Sergiño Dest from Ajax, making the 19-year-old right-back the first-ever player to be signed by the legendary Spanish club. And Barcelona hasn’t signed Dest to just loan him back out to a smaller club, as there’s currently an opening at right-back following the departure of Nélson Semedo. Put simply, there’s a very real chance Dest plays loads of first-team football this season.

Dest is just the latest American player to make noise at the top level of world football, as tons of our nation’s elite talent now resides at some of the planet’s most prestigious clubs.

The headliner, of course, is 21-year-old Christian Pulisic, who enjoyed a torrid first season with the Blues, a first season that showed the left-winger flash world class talent, which is something the United States has ever had. Put it his way: by the time the 2026 World Cup rolls around, if all goes well, there’s an extremely high chance Pulisic is one of the world’s elite attacking footballers.

There’s also 22-year-old Weston McKennie, who — after moving from German side Schalke to Italian giants Juventus over the summer — starts in a midfield managed by the legendary Andrea Pirlo and in the same team as Cristiano Ronaldo.

Pulisic, McKennie, and Dest aren’t the only Americans making noise, as 17-year-old Gio Reyna is starting games for Borussia Dortmund, 21-year-old Tyler Adams is scoring game-winning goals in the Champions League with RB Leipzig, and 25-year-old keeper Zack Steffen working his way up the pecking order at Manchester City.

Finally, after decades of unfulfilled promise, the United States Men’s National Team may finally compete on the world stage (in a few years).