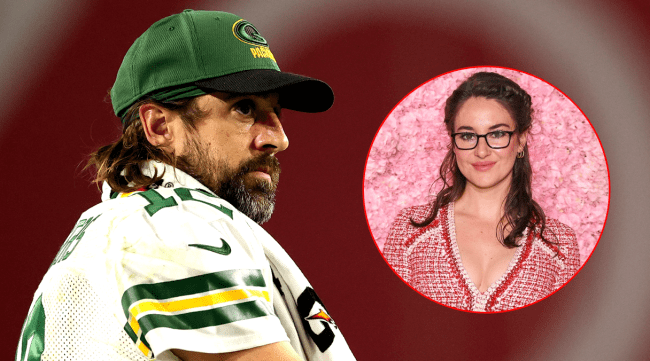 One of the first things many people on the internet thought when they found out that Aaron Rodgers claimed to be immunized, but hadn’t actually been vaccinated was that his fiancee Shailene Woodley had something to do with it.

Woodley has said numerous unusual things over the years regarding the ways she tries to stay healthy. Among them are eating clay, shampooing her hair just once a month, and suntanning her vagina.

“I love a natural way to heal,” Woodley said at the time, so it’s not unreasonable to believe she may have played a part in Rodgers’ going holistic to achieve his “immunization,” which obviously did not work.

On Saturday, Woodley posted to her Instagram stories to complain about the “media” wondering about her cryptic astrology posts in the wake of Rodgers’ completely off the rails interview with Pat McAfee.

In an Instagram story following the interview, Woodley posted a quote that read, “Calm seas may bring you peace, but storms are where you’ll find your power.”

Naturally, considering the timing, many people, not just the media, wondered if her posts had anything to do with what was occurring with her fiance.

Saturday, Woodley fired back at the media in another Instagram story, writing, “Just read somewhere that the media is claiming I deleted an Insta story amid the ‘chaos.’ (An astrology post of all things) (not cryptic at all you dummies.)

“Do you even know how stories work brah? They self-delete after 24 hours. Literally lol’ing over here over your determination to make a story out of nothing. Grasping at straws my dears.”

Woodley, however, reportedly is planning on staying out of the drama, according to a source that spoke with Life & Style.

“Supporting her man. Shailene Woodley “stands by” her fiancé, Aaron Rodgers, amid his COVID-19 vaccine drama, a source exclusively tells Life & Style, “and that’s that.”

“Shailene is keeping a low profile on the Aaron scandal because she doesn’t want to make matters worse,” the insider reveals about the Divergent actress, 29. “She understands alternative health choices and of course she’s shared that with Aaron but the last thing she wants, in this divided climate about the COVID vaccine, is to get embroiled in a political debate.”

The source adds, “Shailene is being dragged on social media, some are blaming her for Aaron’s actions, and she’s not going to get in the gutter with hateful, uninformed internet trolls.”

The Green Bay Packers, who had the number one seed in the NFC going into their ninth game on Sunday, fell to the Kansas City Chiefs 13-7. The Arizona Cardinals now currently have the bye if the season were to end today.

If Rodgers clears protocol he will be eligible to return to the team on Saturday and he will start against the Seahawks, according to head coach Matt LaFleur, despite not practicing all week.