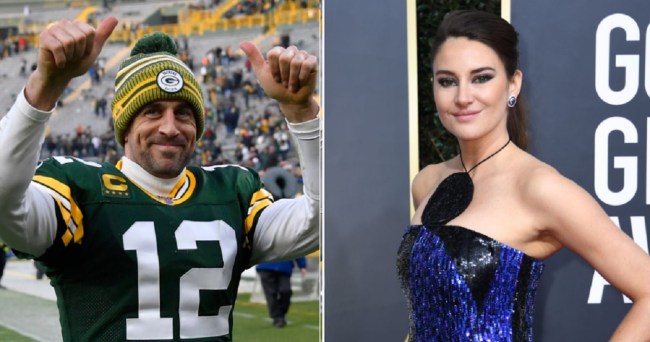 Some poor random guy in LA was enjoying his coffee this morning, and now he’s being put on blast by one of the most famous actresses in the United States.

On Tuesday morning, the Daily Mail released a picture that alleged Aaron Rodgers was breaking quarantine while hanging out in Los Angeles.

"Aaron Rodgers, who tested positive last week, raised even more eyebrows Monday by breaking quarantine as he was spotted grabbing some coffee near San Francisco. Per NFL rules, he should still be self-isolating for ten days." @statefarmhttps://t.co/rNJafevXAC pic.twitter.com/uoAfi5qyyj

The Daily Mail’s report was quickly debunked, considering the guy in the picture looks nothing like Aaron Rodgers.

Also, it's not him in this photo, either.

While shooting down the report on her 4 million follower Instagram account, Shailene Woodley implied that the random guy in the picture had a small penis because Rodgers clearly has “bigger” feet. She also went on to mock the car the guy in the picture was driving.

poor guy just wanted to go get some java now he has a shitty car and a small dick. https://t.co/PpPwPThlSI

poor guy went to grab starbucks and got home to shailene woodley implying he has a small dick. RIP https://t.co/1bIE2cSp6D

Lmao bro just went to get his morning coffee and got his ass fricasseed https://t.co/BbCpMqxU7B

Homie opening up Twitter to see Shailene Woodley roasting his dick and that the world is discussing it. https://t.co/IVo40iAUNC pic.twitter.com/hAORFukbrM