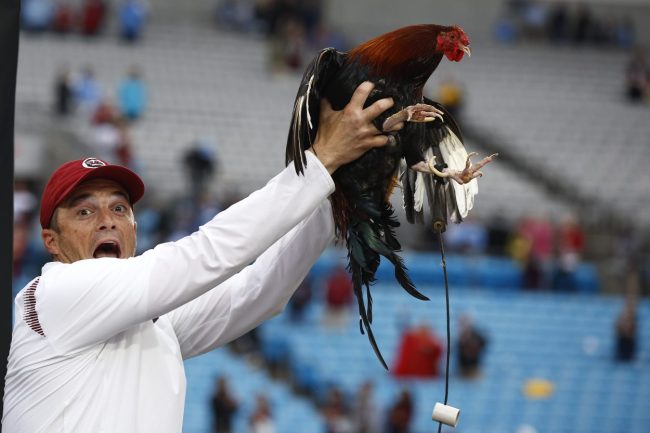 Imagine hating fun so much that you are willing to openly root against it. Well, CBS Sports college football writer Dennis Dodd does exactly that.

On Thursday afternoon, South Carolina beat North Carolina in the Duke’s Mayo Bowl to cap a seven-win season that nobody saw coming. That includes Dodd.

The game was played during the day, and the win meant a lot to first-year Gamecocks head coach Shane Beamer.

This moment between Shane Beamer and his son at the end of the game was beautiful pic.twitter.com/hSuGSZhUiz

It also meant a lot to the players, which is most important.

In addition to the result on the field, the game led to some tremendous television moments.

During the broadcast, Mike Golic Jr., Anish Shroff and Taylor McGregor ate unconventional foods with mayonnaise with no regard for human life. Afterward, Beamer had a celebratory mayonnaise bath dumped on his head.

It was awesome, and for a great cause. The Duke’s Mayo Bowl agreed to give $10,000 to the winning head coach’s charity of choice if they allowed the mayo dump.

But Dodd didn’t enjoy the bath. He instead chose to yell at a cloud in a since-deleted tweet. 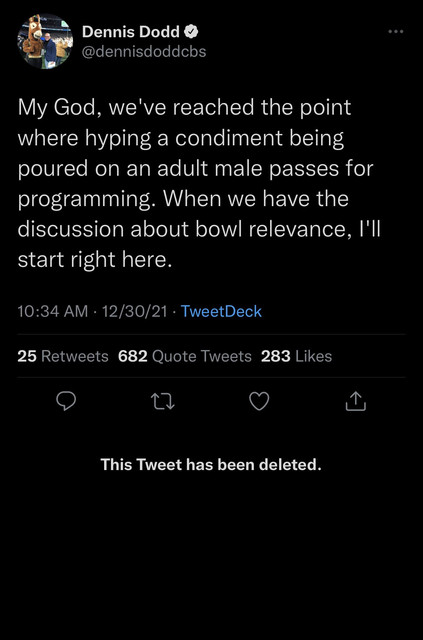 In response, Beamer clapped back and put Dodd in a body bag. His reply was absolutely ruthless, and he told the curmudgeon CBS writer to find some joy.

Beamer also said that he was praying for Dodd, which serves the same purpose as saying to someone “bless your heart” in the South. If you know you know.

Here is what Beamer had to say:

What’s it like being so miserable all the time ? For a sport you “cover” @dennisdoddcbs …Praying for you

Take a seat, Dennis Dodd. Bowl games are fun. For the players, for the coaches, for the fans. If you don’t like them, don’t watch. Pretty simple.