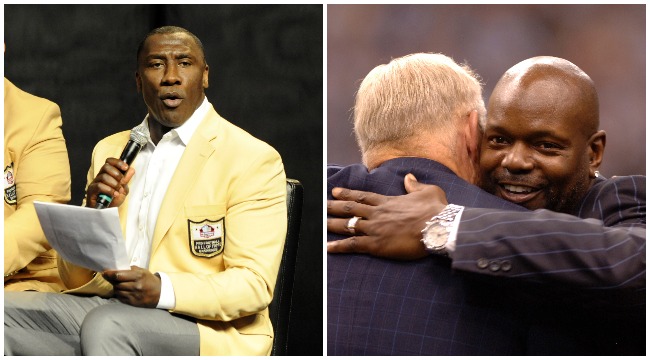 If there’s one thing the internet has no tolerance for it’s hypocrisy. Kill your wife and a waiter, tweet away. But say something inconsistent with the person you project yourself to be: delete all your old tweets and hide under a rock for two days.

All-time great Emmitt Smith is the latest to break this unspoken web law, and for it, he’s getting enough shit to fill every toilet in the state of Texas.

On the Adam Lefkoe Show, the three-time Super Bowl champ supported Jerry Jones’ stance that free agents like Dak Prescott should be willing to take “team-friendly” contracts and make whole on the financial benefits that come with being a part of “America’s Team.”

“How much money are you willing to leave on the table? The Cowboys are a marketable organization…

Instead of taking 35, would you take 28? Leave some for Amari and pick up the rest in endorsements.”@LefkoeShow pic.twitter.com/coZn8iPVpy

“Dak has to understand and maybe take another perspective,” Emmitt said on the Adam Lefkoe Show. “The perspective may not be all the money you get, it may be how much money are you willing to leave on the table because the Cowboys (are) a marketable organization.”

“So if you’re the face of the franchise, instead of taking 35, would you take 28? And leave some for Amari and pick up the other 35 through endorsements.”

When Lefkoe challenged the NFL’s all-time leading rusher about how easy it is to advise a player to leave money on the table from an analyst chair, Smith had the gall to say: “I practically did that.”

Maybe he did, but I seem to remember Smith sitting out the first two games of the 1993 season before signing a four-year, $13.6 million deal that made him the highest-paid running back in pro football. Maybe the reason why Emmitt’s convinced himself he took a pay cut was because he was initially asking for four-years, $27 million in the 90s, nearly doubling the salary of Dan Marino, the league’s highest-paid player.

Shannon Sharpe blasted Emmitt for “pocket-watching,” especially considering how egregious his contract requests were in the early 90s.

"Emmitt Smith is pocket-watching. Dak Prescott is a business and it's not his job to worry about the salary cap. Dak would be a damn fool to give Jerry Jones, who's worth that kind of money, a discount."@ShannonSharpe on Emmitt Smith suggesting Dak take a discount pic.twitter.com/DPFB3cymx5

Clarence E. Hill Jr. of the Fort Worth Star-Telegram reported last week that Prescott’s agent has “broached a deal in the range of $34 million annually” making Prescott one of the three or four highest-paid players in NFL history. Not bad for a fourth rounder who we’re not sold on quite yet.