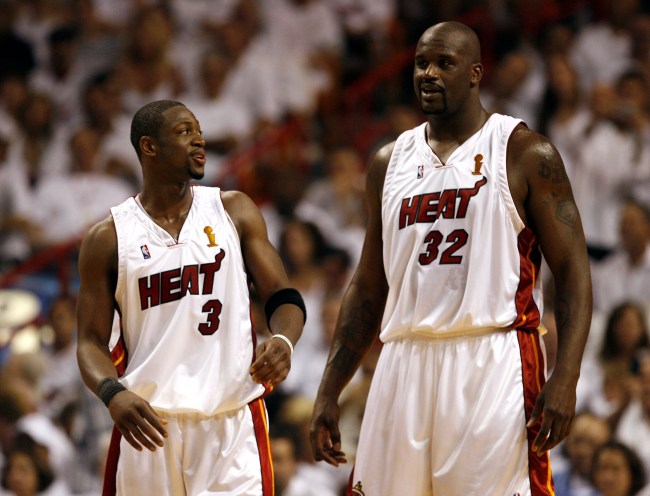 We all know that Shaq is one of the funniest guys to ever play pro sports, but he’s maintained that high level of entertainment since retiring from the NBA, showing us all his lighter side as an analyst for TNT. While O’Neal often goes after co-host Charles Barkley on the set of NBA on TNT — with the two having an older brother, little brother kind of relationship, where they poke fun at one another’s size anytime they get the chance to — it seems as if Shaq’s trying to zing a newer member of the crew.

That person would be former Miami Heat teammate Dwyane Wade, who Shaq has always had a solid relationship with. However, on the most recent episode of the pregame show, O’Neal displayed an odd look, with the big fella letting his hairline grow out after losing a friendly bet to Wade. The result? Pure hilarity; so take a look at the images below, as well as some explanation behind the wager.

.@SHAQ’s punishment for losing his friendly wager with D-Wade is priceless 😂 pic.twitter.com/JII7yrrH99

.@SHAQ lost a bet to @DwyaneWade, so he had to let his hairline grow out 🤣

Somewhere, LeBron James is staring at himself in the mirror to see if he looks similar. Side note: Yes, Bron, you look just as ridiculous as Shaq does in the images and video above. It’s time to come home, King.

After millions of people saw the result of Shaq’s peach fuzz (but clean) hairline on TNT, you just know people couldn’t help but weigh in, with Twitter bringing all sorts of heat to the four-time NBA champ. Take a peek below at some of the comments.

Him and Stephen a twins pic.twitter.com/gB9bQbiPrJ

D Wade: Shaq, your hairline is really that bad?

Most guys over the age of 35 have thinning hair, so Shaq’s hairline is pretty common. Seeing as how deep back it is, it’s a good thing he just gave up on it and didn’t try hanging on too long — because we all know some dudes just can’t help but do that. (**Cough, cough**): Looking at you Stephen A. Smith. Kudos to O’Neal for being a good sport with all this, though, and owning up to the lost bet.