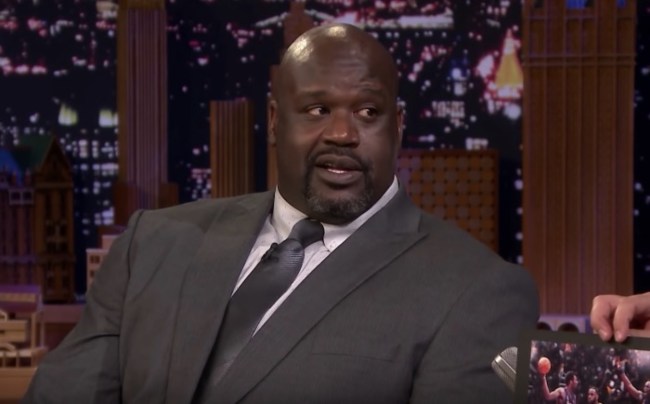 Shaquille O’Neal is one of the greatest on-camera personalities in sports. You never know what’s going to come out of DJ Shaq Diesel’s mouth.

Jimmy Fallon invited Shaq onto The Tonight Show Starring Jimmy Fallon as his first guest of the new year and Shaq hit the ground running. After a few moments of niceties and catching up on what Shaq’s family is up to, Fallon hit him with a question that’s been floating around since Anthony Davis joined LeBron James on the Los Angeles Lakers squad this season: who would win in a 2-on-2 in their prime, Kobe and Shaq or LeBron and Anthony Davis?

The Lakers are in 1st place in the West (29-7) and they’re currently riding a 5-game win streak. Anthony Davis is 7th in the NBA right now in PPG with 27.7. LeBron’s averaging 24.9 points per game and leading the league in assists with 11 per game. The Lakers are on fire this season.

But when Shaq was asked if he and Kobe could beat LeBron and Anthony Davis he didn’t even flinch. He started by saying he loves hypothetical questions like this that could never be answered but he then dove into a straight-up ‘hell yes’ they could win. His response is around the 1:50 mark of the clip below which I’ve set the video to start at but if you hit play and it starts from the beginning you can just skip ahead to that point.

I feel like so many of the people arguing on Twitter are saying things like LeBron’s better than Shaq and Kobe who are better than AD so it’s a toss-up but you HAVE to take Shaq’s size into consideration. How the hell is LeBron or AD ever going to stop Shaq’s frame in a 2-on-2 game? And if Shaq wants to he can dish it out to Kobe at any point. Shaq’s answer was perfect “Yes. Hell yes. Of course [we’d win], Cause there’s only one contributing factor. Who’s gonna guard me?”

I think it’s only a matter of time until we see a YouTube channel pop up that runs hyper-realistic simulations of things like this. Using artificial intelligence to try and settle arguments that really aren’t meant to be settled. Half of the fun in discussing this is knowing there’s really no true answer.

Shaq and Kobe brought the city of Los Angeles three championships. Until LeBron raises a trophy in the City of Angels I’d like to think that he’s day Kobe and Shaq would win and put some respect on their names.