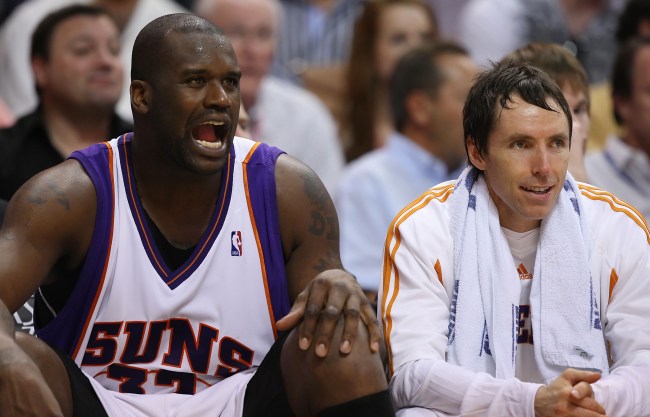 Based on how much he smiles in the countless commercials he’s starred in since his basketball career came to a close, it’s hard to imagine Shaquille O’Neal is an angry guy.

I mean, just look at this:

Who needs Shake Shack when we’ve got the Shaq Shake?

However, O’Neal didn’t manage to have one of the most dominant NBA careers of all-time by being a nice guy on the court, which became very apparent the one time Charles Barkley though it would be a good idea to throw a basketball at his face.

However, it turns out it wasn’t just opposing players who were on the receiving end of Shaq’s wrath during his time in the league.

Grant Hill recently sat down with CBS and recounted what it was like to play aside O’Neal during the big man’s brief stint with the Phoenix Suns— a segment that included Shaq asking Hill to talk about the time he wrestled former teammate Gordan Giricek before a game.

It turns out it was a bit more than a wrestling match based on how Hill recounted the situation.

“Shaquille O’Neal choked out Gordan Giricek before a game. He put him in a sleeper hold and the guy was knocked out, passed out on the locker room floor before the game. Definitely one of Shaq’s memorable— or not-so-memorable— moments from the year and a half that I played with him with the Phoenix Suns.”

At least his feud with Kobe never escalated that much.

Of course, there’s a chance Shaq could have pulled a Lennie from Of Mice and Men and simply underestimated his own strength, which I assume is pretty easy to do when you’re a 7’1″ dude who weights over 300 pounds.

I think I’ll give him the benefit of the doubt.