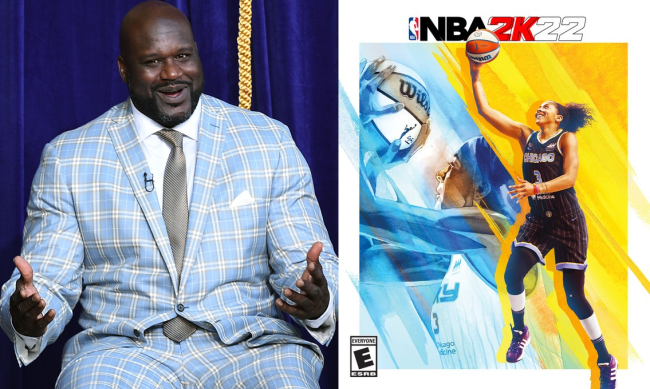 For the first time ever, a woman will grace the cover of an NBA 2K video game when Candace Parker appears on one of the covers of NBA 2K22 NBA 75th Anniversary Edition versions of the game.

The 25-year-old Parker’s appearance on the cover of NBA 2K22 will coincide with the 25th anniversary of the WNBA beginning play.

I’m honored to work with a company that’s investing in women and betting on us to succeed. I’m hopeful there will be many more badass females to follow 💪🏽💪🏽 pic.twitter.com/WJan4YE7Qt

Parker, currently a member of the Chicago Sky, could only laugh as Shaq responded with an open mouth, a clap, the removing of his glasses, then wiping away faux tears and crying like a proud papa.

“Get outta here, Shaq!” Parker responded with a laugh.

Related: Shaq Suggests The WNBA Should Lower The Rim Which Leads To Extremely Uncomfortable Exchange With Candace Parker

“And, you know, as your days kind of get fewer in your career and you know that there’s more basketball behind you than in front of you, I think you really take these moments. And so, this means a lot.

“You know, I hope that I’m the first, but I’m not the last. I hope that there’s many more young women and young girls that look and say, like, “We can do this.”

Speaking to the Washington Post about the honor, Parker said, “I think it’s a benchmark of women’s basketball for sure. I think most importantly it speaks to visibility and how important it is and how important the WNBA is. Everyone is looking at it that it’s impacting little girls, but it’s also impacting little boys and young men and young women and men and women. I think our game is different than the NBA, now it’s embracing that fact. Now more than ever, fans want to follow the athlete. Through social media, through video games, it’s adding and benefitting the WNBA.”

Luka Doncic, Kevin Durant, Dirk Nowitzki and Kareem Abdul-Jabbar will all also be featured on covers of NBA 2K22 when it is released.

Huge honor to be on the cover of #NBA2K22. Thanks @NBA2K! pic.twitter.com/ptIhpVNUdN

I have 2 big announcements to make: I’m headed to Milwaukee for Game 4 tonite & can’t wait to see all the fans for the win! If you’re lucky enough for me to hear u scream I’ll flip you a signed card. More of a wowzer…
“I’m so excited to be on the cover of #NBA2K22. Thx @NBA2K! pic.twitter.com/JC7MJta5UU

Not sure who these other guys are but huge honor to be on cover of #NBA2K22. Thank you @NBA2K pic.twitter.com/Aetu6HblLB

Related: Things Get Awkward When WNBA Player Candace Parker Schools Shaq On ‘Inside The NBA’ About Modern Basketball Strategy