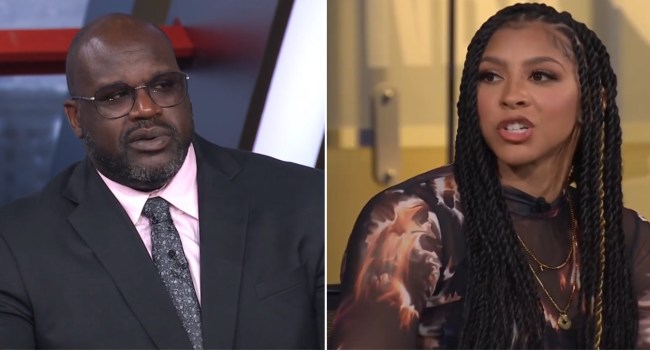 Shaq and Candace Parker continue to have uncomfortable, awkward arguments on Inside The NBA.

Just a few weeks ago, Candace went viral when she schooled Shaq on the intricacies of the modern NBA offense.

On Tuesday night, Shaq suggested the WNBA lower their rims so that players could dunk but Parker immediately dismissed the idea. The whole thing was pretty painful to watch.

Candace Parker wasn't into Shaq's suggestion that the WNBA should lower the rim so that players could dunk "It's coming…My next child will be drop step dunking" pic.twitter.com/5tVkRJ3Nb4

Shaq: In beach volleyball, the women’s net is about half an inch lower, so do you think if we just lower the rim so you could dunk like we dunk that it’ll give you more oomph that you already have. because listen you guys are doing the stepbacks, the pullbacks, ya’ll are doing everything we’re doing, I don’t see a lot of people going up with two hands.

Candace Parker: No, it’s coming I guarantee my next child will be drop step dunking

The WNBA defenders felt Shaq was offbase with his suggestion.

steph curry, trae young and kyrie irving have 3 of the top-15 highest-selling jerseys in the nba this year

they have combined for one dunk

this talking point is not just stupid, it also has no merit https://t.co/YDqudRILNL

Love @Candace_Parker !! The WNBA is fun to watch and it’s pure hoop! None of this flopping and constant crying to the refs, plus the play defense in the WNBA https://t.co/qXb8fwvu9Y

It’s not a bad idea at all. The rim height is for the male physique. Lowering it to accommodate more woman’s would make the game more exciting and fun. Just check your pride at the door 🚪. It’s not a bad idea. https://t.co/p12aoytO95