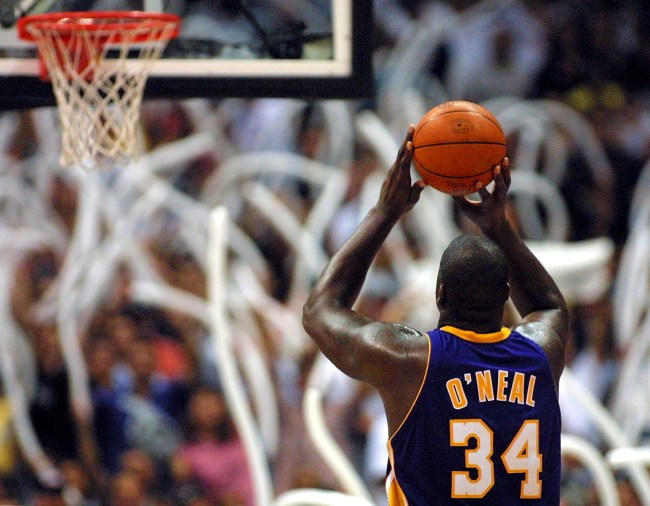 Shaquille O’Neal missed over 5,300 free throws in his career, posting a career free throw percentage of 52.7. If, for hypothetical sake, Shaq made all of those free throws he missed, he would sit just above Kobe Bryant for third in all-time leading scorers in the NBA. He’s currently in eighth.

Shaq’s dismal free throw shooting is one of the only skidmarks on his incredible legacy, as he managed to shoot 5.5% better from the field than he did from the line. If it’s of any consolation to the most dominant big man of all-time, Ben Wallace shot a career free throw percentage of 41.1 percent and in 2016, Andre Drummond missed an NBA-record 23 free throws in one game. Yikes.

The four-time NBA Champion’s ineptitude from the line has become punchline, and Shaq’s son Shareef O’Neal is in on the joke.

Earlier this week, Shareef posted an Instagram photo of he and his brother Shaqir being heckled by fans for missed free throws. Shaq, who still feels the need to defend himself against trolls who can’t even touch the net, fired back in the comments.

Shaq even gets defensive in his son's IG comments 😂

And tell em you daddy is the best to ever do it, but then again you ain’t gotta say nothing. THEY ALREADY KNOW

I challenge that heckler to say it to Shaq’s face. Unlikely.

visual history of @SHAQ taking vengeance on rims for clanking half of his free throw attempts over the yearspic.twitter.com/hYhkp26TLQ

(2006) Shaq goes off the backboard during a free throw in the ASG. 😂 pic.twitter.com/Ub4Wyk9EXw