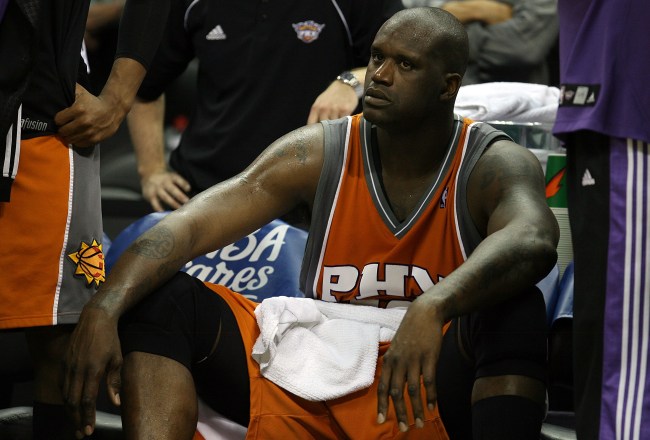 While Shaq might best be known as being, arguably, the most dominant force the NBA has ever seen, using a combination of size, power and skills to get the best of opponents, he’s also been one of the most entertaining guys in league history, too. That extends to retirement, as we’ve seen O’Neal continue to make audiences laugh with his hilarious analysis on TNT.

During Shaq’s playing days, though, nobody came close to matching his wit and charisma, with the guy literally giving himself about 50 different nicknames throughout his career. And, given that sense of humor, you know the big fella had a little fun at the expense of his own teammates.

One of those guys was Goran Dragic, with O’Neal giving a little tough love to the then rookie back during the 2008-09 NBA season while both were playing together on the Phoenix Suns.

Dragic recently joined ESPN’s Adrian Wojnarowski on “The Wod Pod” podcast, and revealed the hilarious way Shaq hazed him as a first-year player.

This is classic Shaq, man, and quite the story for Dragic to tell when he recounts his first season in the league while playing alongside the future Hall of Famer. But, sheesh, O’Neal did the guard dirty AF by making him carry around a broken keyboard all season.

Obviously, Shaquille O’Neal loves his music — as he’s released a few rap tunes over the years and occasionally DJs events — so good on Dragic to at least inquire why, during that season together, he never heard the guy actually playing the keyboard. I would’ve loved to see what Goran’s facial expression looked like the second he heard that the keyboard didn’t even work. I mean, honestly, what can you do at that point other than just laugh about it, right?

Luckily, the hazing doesn’t appear to have left a sour taste in Goran Dragic’s mouth, because he seemed to toss out major love for Shaq when describing him as a teammate during that rookie season, while saying the big fella helped him sort of find his feet in the NBA. Still, knowing that the keyboard was broken all year long has to haunt his dreams even to this day.