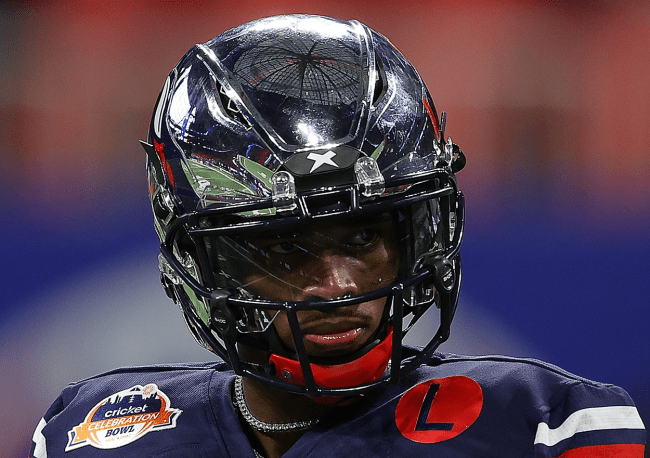 Shedeur Sanders is one of the biggest brands in college football. Despite his inability to win a College Football Playoff or the Heisman Trophy, Deion Sanders’ son is well on his way to one of the most-decorated careers on the FCS level.

Sheduer, who started all 12 games at quarterback for Jackson State, was named the Jerry Rice Award winner in December. The award is presented to the national freshman player of the year in Division-I FCS. It also helps that his last name is what it is.

As a result of his notoriety and unique position as a four-star HBCU quarterback, he has found a lot of success in the Name, Image and Likeness space. Sanders signed a deal with Beats by Dre shortly after the NCAA introduced its new legislation and inked a historic deal with Gatorade in January.

Although neither contract was made public, they’re lucrative. That was made very clear earlier this week when Sanders stopped by the Balenciaga store and dropped $8,000 on designer clothes.

Sanders has $8,000 to drop on clothes. Clearly he is doing well financially.

According to his On3 Sports NIL valuation, Sanders is worth $786,000. That number factors-in his social media following, on-field play and current/existing deals. He is the No. 21-ranked player on On3’s Top 100 list and the No. 14-ranked player in his sport.

Regardless of what the exact number might be, if Sanders is dropping bags at Balenciaga, his deals are rather lucrative.