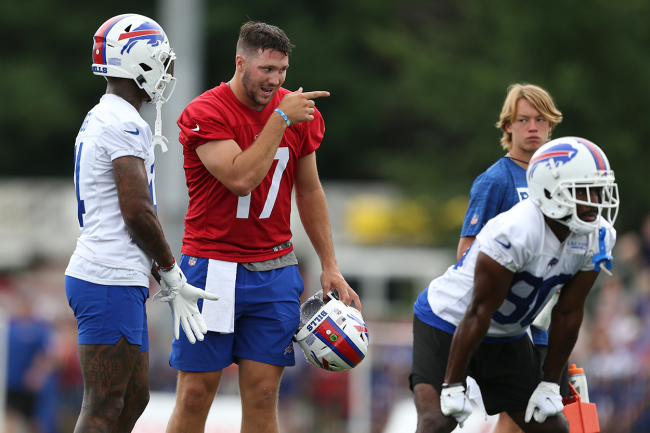 As the NFL season gets underway and the second week of training camp comes to a close, new teammates have had enough time to get acquainted. Even the rookies.

And with that acclimation comes one of the best traditions of the preseason— the talent show.

Every year, at almost every organization in the league, the rookies are asked to perform for the veterans in a talent show. Last year, in Philadelphia, offensive tackle Jordan Mailata dazzled his teammates with a very, very good performance of Chris Stapleton’s ‘Tennessee Whiskey’ that led him to compete on The Masked Singer. He has the voice of an angel.

This year, in Buffalo, the rookies do not have voices anywhere near as talented as Mailata, but they are just as entertaining.

Earlier this week, it was time for offensive linemen Luke Tenuta, Derek Kerstetter, Tanner Owen and Alec Anderson to shine. They took centerstage in front of the offensive vets and did so shirtless.

Without a background track, the four big fellas proceeded to belt out a rousing rendition of the Backstreet Boys smash hit ‘I Want It That Way.’ The passion was there and they went all-out, and Josh Allen approved.

Stefon Diggs shared a snippet of the performance on his Instagram and it is as amazing as it sounds. Take a look:

Rookie skits & performances are what I live for @stefondiggs @BuffaloBills @backstreetboys pic.twitter.com/eIaL0Z2ZDU

Although the four Bills rookie lineman do not have a future career in music like Mailata might, it was pure joy. There is nothing that better says football is back than four massive linemen breaking it down to the Backstreet Boys during training camp.