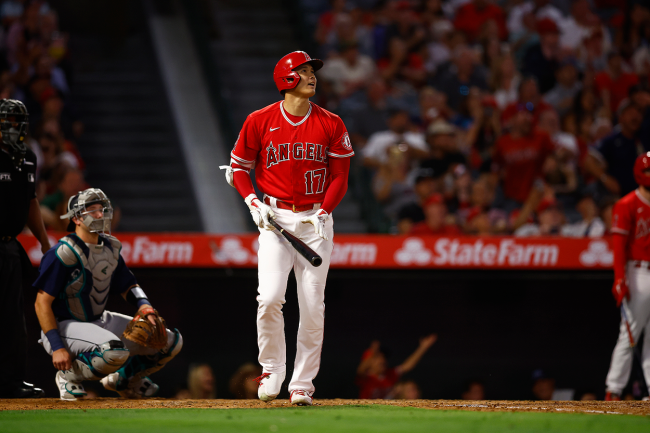 Shohei Ohtani is the most electric player in baseball and to say otherwise would simply be untrue. The 27-year-old phenom continues to do things that have literally never been done before.

On Tuesday and Wednesday, he made history. Ohtani became the first player to ever have at least eight RBIs in one game and then turn around and strike out at least 10 batters the very next day.

On Saturday, he hit a career-long home run. It may not have landed yet.

During the bottom of the third inning against the Mariners, Logan Gilbert left one hanging over the zone. Ohtani made him pay and hit a 462-foot moonshot at 118 miles per hour off of the bat. It was a rocket.

To make the entire thing even cooler, on the pitch prior to the dinger, Ohtani nearly got hit in the head. Gilbert lost control of his fastball and sent one soaring extremely high and extremely tight, forcing Ohtani to duck out of the way.

He stepped back into the box and got ahold of the very next pitch, sending his career-longest home run into orbit. The swing that Ohtani put on the ball truly could not be more beautiful and video from down on the third baseline shows just how gorgeous it was. It really could not be smoother.