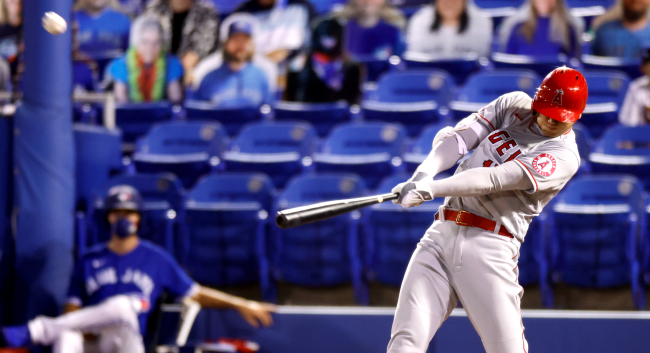 Two-way MLB superstar Shohei Ohtani is unlike any other professional athlete that, outside of all but a small handful of people, have ever seen in their lives.

No one person should be able to do what he does.

It’s hard enough to hit a baseball at the professional level. It’s almost impossible to accurately throw a baseball 101 miles per hour.

Yet here’s this guy, Shohei Ohtani, not only doing both, but he does it well enough to start the 2021 All-Star Game as not just the American League’s starting pitcher, but also the team’s leadoff hitter.

That literally should not be possible.

The number of “firsts” that Ohtani has achieved in Major League Baseball has already made him not only the 2021 AL MVP, but a historical legend – and he’s only 27-years-old.

On Wednesday, a new profile of Shohei Ohtani was published by GQ magazine.

In it, we learn about his early life as a yakyu shonen — “a kid who eats, sleeps, and breathes baseball.”

Shohei attended one of the top baseball high schools in the country and experienced his first real national attention as an 18-year-old when he was clocked on TV throwing a 100 mph fastball.

We learn about his signing and playing with the Japanese pro league’s Hokkaido Nippon-Ham Fighters.

While living in the team dorms, he sent his salary home to his mother, who in turn put about a thousand dollars in his personal bank account each month that Shohei rarely touched.

We find out a little about his early days with the Los Angeles Angels.

The scene in Arizona was frenzied. Rare are the rookie prospects who are expected to immediately deliver on such sizzling hype. Shohei struggled at first, spiking balls from the mound, whiffing at Major League gas.

And how it was none other than Hall of Famer Ichiro Suzuki who straightened Ohtani out and set him back on his path to MLB greatness.

At dinner that night, they talked about the transition to the league, the initial struggles of getting used to life in America: “But he basically told me: ‘Remember to be yourself. You made it this far being yourself, so don’t change that, stay within yourself.’”

There was also one more thing Ohtani discussed that no professional baseball player other than Babe Ruth has had any right to be asked.

You’re facing yourself for 10 at bats: What happens?

He understands me without Ippei’s translation and laughs his high-pitched laugh. Then he thinks very hard before responding. He is throwing pitches, swinging at pitches, seeing pitches from both sides.

He is weighing the statistics, of which he is familiar. He loves comparing numbers across the seasons, the decades, the generations.

A virtue of baseball’s enduring, if interminable, 162-game regular season is the harmony between past and present that allows us to quantitatively measure the greatness unfolding before our eyes.

He wasn’t obsessed with baseball history growing up, but he loves poring through the detailed stat lines he has access to now of the players everyone knows, but especially of the players he didn’t realize were quite as dominant as they’d been in their time. “You hear these big names from the past,” he told me at one point, “and you know they were good players, but you can see now just how good they really were.”

Like relief pitcher Koji Uehara, the Japanese transplant 19 years Shohei’s senior, who was by several metrics one of the most sneaky shut-down relievers of the last decade.

“Last two: a fly-out and a groundout.”

He has certainly succeeded at that. When it comes to being a once-in-a-lifetime athlete, Shohei Ohtani is as real as it gets.

Read the full in-depth profile over at GQ.com.