An Olympic Runner Tripped On The Final Lap, Went From Last To First With Insane Comeback Win 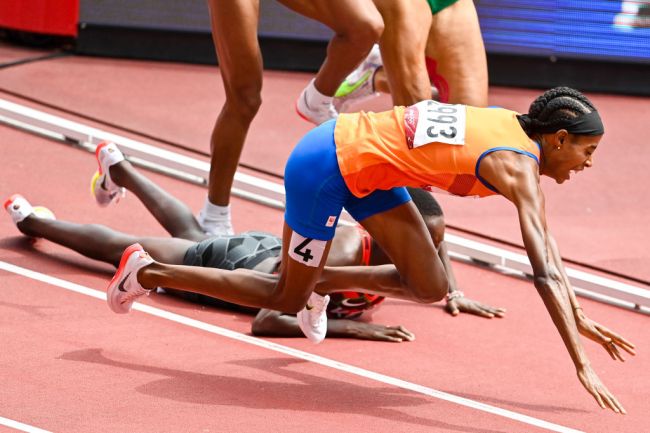 Dutch distance runner Sifan Hassan was dead last with just under 400 meters left in the 1,500-meter prelim in Tokyo. The 28-year-old was entering the bell lap when a runner tripped in front of her and caused a chain reaction.

Hassan was on the tail end of the sequence and ended up on the ground. Suddenly, one of the medal contenders was well behind the leaders, who pushed forward around the first turn of the final lap.

Eleven of the world’s fastest runners stood between Hassan and the finish line. Not only was she out of contention to advance to the next round, but winning the heat was nearly unthinkable.

And yet— she won.

Hassan stood up from the fall and turned on the gas. With blazing pace, she passed each woman in front of her one after one.

On the final straightaway, the Ethiopian-born Dutchwoman passed the front of the pack and crossed the finish line in first. You can watch the full race here. It was epic.

Sifan Hassan of the Netherlands tripped with one lap to go in a preliminary heat of the women's 1500m but got back up to continue the race.

She ended up winning her heat to advance. #TokyoOlympics pic.twitter.com/gU536XvyHg

Entering the Games, Hassan set out to make history with gold medals in the 1,500-meter, 5,000-meter and 10,000-meter races. It is something that no man or woman has ever done at the Olympics.

Because she pulled off the unbelievable comeback, she is still on track. However, people were concerned with how much energy she spent in the 1,500-meter heat.

Hassan competed in the 5,000-meter final just a few hours later and they didn’t want her to be gassed. Well, sure enough, she made a similar final-lap push to win the first gold medal for the Netherlands in 29 years.

From the back, to the middle, to the front, to GOLD🥇!! Sifan Hassan makes an incredible move to win the gold in the 5000m 🤩

It's the first Olympic medal for Hassan and the first gold in athletics for the Dutch 🇳🇱 in 29 years 😱#OlympicHERstory | #TokyoOlympics pic.twitter.com/lftepXlE6N

Nobody has a crazier final kick than Hassan this year. What a remarkable pair of finishes!