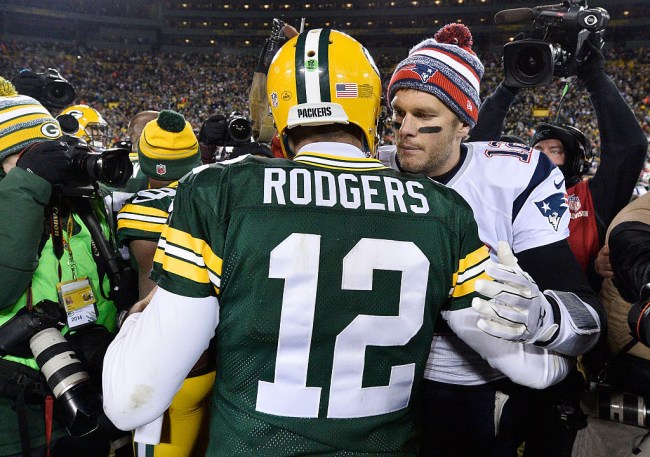 Last night, Aaron Rodgers completed the 24th game-winning drive of his career after leading the Packers to a 33-30 victory over the 49ers.

Rodgers tied up the contest by throwing a beautiful touchdown to Davante Adams with 1:55 remaining before a thrilling last-minute drive led to a game-winning field goal.

Two scoring drives in the final two minutes to complete the comeback.

Rodgers’ heroics came a day after Tom Brady led the Patriots down the gridiron to set up a Stephen Gostowski field goal to put a cap on the 43rd game-winning drive of his storied career.

Most people would agree both Brady and Rodgers are both Very Good Quarterbacks but there’s one person who decided Rodgers brilliant performance was the perfect opportunity to piss on his parade.

I’m assuming you won’t be shocked to learn this person was Skip Bayless.

Over the course of his not-so-storied career, Bayless has treated the world to countless Hot Takes (and far too many shirtless pictures)— like the time he decided to put LeBron James on blast for having the sheer audacity to drink water during a game.

How dare you, LeBron. How DARE you, sir!

After last night’s game, Bayless decided there was no better time to hop on Twitter to let the world know exactly how he felt about Rodgers in the grand scheme of things.

Aaron Rodgers isn't in the same league with the reigning MVP who threw for 182 yards in the 4th quarter last night to beat the NFL's hottest team.

Amusing how quickly most ppl forget Aaron Rodgers is 5-6 in the postseason since his lone long-ago Super Bowl. Should be 4-7 bc DEZ CAUGHT IT. Tom Brady, he is not.

Someone get a fire extinguisher!

Mason Crossbar allowed Aaron Rodger to escape Dak Prescott with two of the strangest, luckiest field goals ever kicked, a 56-yard slice that barely greased over the crossbar and a 51-yard duck-hook that somehow straightened back out. Dak has outplayed ARodg all 3 times.

I would love to know how Rodgers’ postseason performance takes away from last night’s achievements but there are some questions in life that are destined to go unanswered.

Bayless doubled down on his comments on Undisputed this morning where he called Rodgers “the LeBron James of the National Football League” (as if that’s somehow an insult) and caused Shannon Sharpe to yell loudly in response.

"It was a mismatch, he made some nice throws — but am I going to do handsprings over that against the 29th-ranked defense? And CJ Beathard?"@RealSkipBayless on Aaron Rodgers' performance against the 49ers pic.twitter.com/TtdReyDIQT

Sure, Brady might have an edge in the stats department but that might also have something to do with him being seven years older than Rodgers.