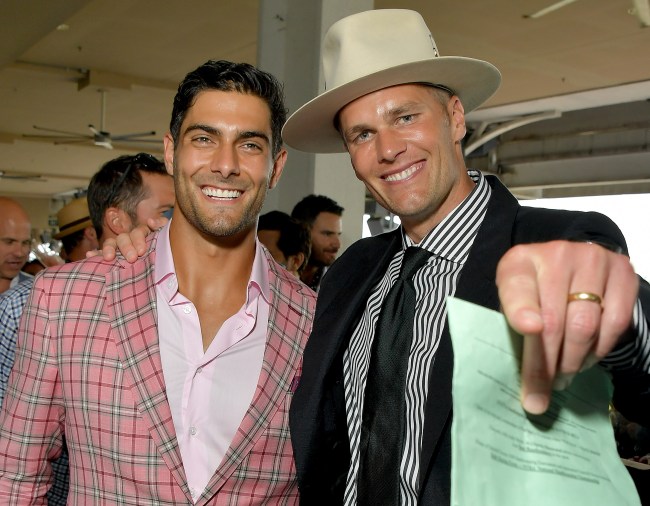 Skip Bayless is one of the biggest trolls in all of sports media, which, you know, has helped him stay relevant for the past few decades on TV. While the loudmouth host of FS1’s Undisputed has made plenty of enemies in his career for steaming hot takes, he just may have created a new one just 12 hours after Super Bowl 54 ended — and that’d be current San Francisco 49ers quarterback Jimmy Garoppolo.

Imagine being Jimmy G this morning after a heartbreaking loss in the biggest game of your life, battered, bruised and defeated, and hearing a guy like Skip Bayless go in on why the Niners should release you after guiding the team to said big game. Such is the life of a starting quarterback in the NFL, because that’s exactly what happened, as Bayless is already suggesting a serious idea that may be too perfect.

While speaking about Super Bowl 54, Bayless discussed Jimmy Garoppolo’s mega contract with the Niners that he signed last offseason — which has a whopping $110 million over the next four years. Rather than stick with the signal-caller who’s 19-5 in his career as a starter for the team, Skip thinks that San Francisco should cut their losses and move on from Garoppolo, then turn their attention to a guy named Tom Brady. Take a look below at Bayless’ explanation.

"This is what I would do: I would cut Jimmy G and sign Tom Brady for 2 more years. Brady would live and love to go home. He started as a 49er fan in San Mateo." — @RealSkipBayless pic.twitter.com/u4r1voP7RL

OK, fair point, Skip. Sure, the Niners bring the GOAT back to his native California and get a guy in Tom Brady who has won six Super Bowl rings, but this can’t happen, right? I mean, there’s no way in hell the Niners could be this cold-hearted to Jimmy G after all he’s given them the past couple years — which included coming back from a torn ACL suffered during the 2019 season — could they? According to people on Twitter, they just can’t see it happening, as they reacted to Bayless’ wild suggestion.

He been drinking to purple drank with lil Wayne

This is why his show won't last…I can't believe it's still on to be honest.

there are no words… pic.twitter.com/ggCJdMGIz0

Jesus…go get some sleep old man

Skip walking in to the Undisputed Office this morning pic.twitter.com/ahQI90hJSn

As you can see by some of the reactions from people on Twitter, Skip Bayless’ suggestion doesn’t seem too popular. But, hey, the NFL is a serious business, and with all the rumors about Tom Brady’s future, who knows if the Niners legit look at bringing in the 42-year-old quarterback to try and snag one last Super Bowl title. If that does happen, man, thoughts with Jimmy Garoppolo, who would then play second fiddle to Brady twice in his career with two different teams. Ouch.