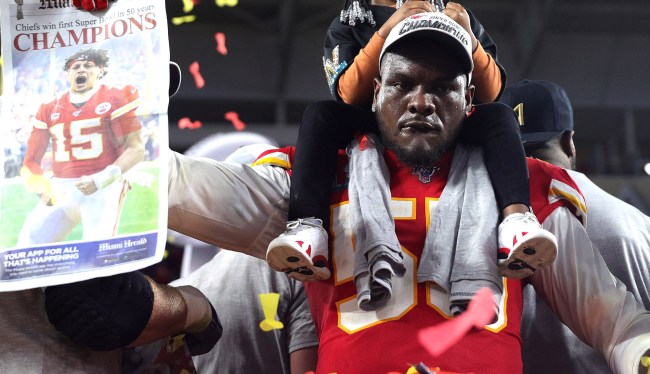 Kansas City’s star defensive end Frank Clark spent most of the postseason giving Chiefs’ opponents bulletin board material, not giving a damn if anyone had a problem with it, then backing up everything he said on the field en route to the franchise’s first Super Bowl victory in 50 years.

This type of brutal honesty (at least in his mind) is nothing new for Clark.

Back in 2017, while on the Seattle Seahawks, Clark chewed out and nearly brawled with rookie teammate Jarran Reed for getting ejected during a game.

In 2016, Clark went on Twitter and called Cam Newton a “bitch” and a “punk ass” for not diving on a fumble during the Super Bowl.

He is not afraid to express his opinion on things.

So when Clark was interviewed on the field after winning Super Bowl LIV, he once again held nothing back.

“You paying the guy $140 million, $130 million, whatever he’s getting paid, man,” Clark said, referring to 49ers quarterback Jimmy Garoppolo. “He’s gotta throw the ball. Obviously he didn’t do that. They threw for about 200 yards on checkdowns. That ain’t enough to win a game against us.”

Frank Clark on #49ers QB Jimmy Garoppolo: “You paying the guy $140 million, $130 million, whatever he’s getting paid. He’s gotta throw the ball. Obviously he didn’t do that." pic.twitter.com/CbYd8IDeDl

For the record, Garoppolo will make $137.5 million and he went 3 for 11 for 36 yards and an interception for a 2.8 QB rating in the fourth quarter as the Niners gave away their lead.

Later, while meeting the media, Clark fired a shot at another opponent, declaring the New England Patriots’ dynasty dead.

Frank Clark says the Patriots’ dynasty is dead. New one coming in KC

Yeah, well, we already knew that, didn’t we? #TitanUp.

Frank Clark was asked if Chiefs were starting a Patriots type dynasty. pic.twitter.com/EOM7sZquhv

Frank Clark: “They want to talk about Patriots so bad … but Patriots aren’t here” pic.twitter.com/9D635zrY4J

Frank Clark has some things to say. pic.twitter.com/Z10xvMnwBA