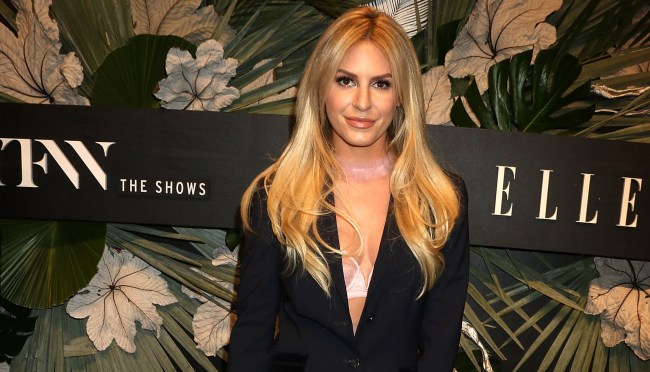 Wednesday night, while meeting with the media at Super Bowl LIV in Miami, San Francisco 49ers defensive back Richard Sherman said about the team’s quarterback Jimmy Garoppolo, “They find something new to criticize him for every day, but they never criticize his looks.”

On Super Bowl LIV Opening Night, Garoppolo was asked by a reporter, “Hey, Jimmy, how does it feel to be the sexiest quarterback in the NFL?”

Something that Rich Kids Of Beverly Hills star Morgan Stewart just discovered this week when she tweeted, “Glad i now know who Jimmy G is Jesus Christ.”

Glad i now know who Jimmy G is Jesus Christ

Stewart followed that tweet up with, “Is he kidding with that entire face? I’m now soooooo excited about the SuperBowl.”

Is he kidding with that entire face? I’m now soooooo excited about the SuperBowl

The 31-year-old Stewart appeared on all four seasons of Rich Kids Of Beverly Hills along with other “rich kids” like Taylor-Ann Hasselhoff and E.J. Johnson.

She admitted in 2015 that she basically lived off her parents’ income (at least until she got married – something that she no longer is), but she does also run a fashion and style website at boobsandloubs.com.

She also has a staggering 1.3 million followers on Instagram where one has to assume she makes bank.

Considering the fact that the 28-year-old Garoppolo “doesn’t have a girlfriend, he has all the girlfriends,” I am realllly hoping these two hook up.