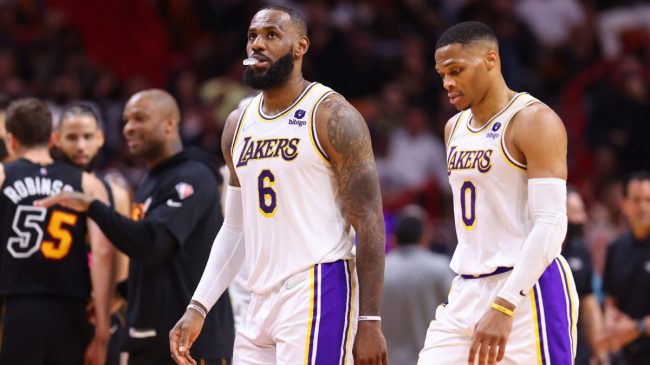 The Bulls opened up their NBA Playoff series against the Milwaukee Bucks on Sunday.

Chicago ultimately fell to the defending NBA champs by a score of 93-86 after erasing a 16-point lead. The comeback effort fell just short, but it didn’t keep viewers from seeing the production of newcomers Alex Caruso and DeMar DeRozan.

It’s nothing new, of course, as DeRozan led the team in scoring this season while Caruso contributes with a high motor and some unbelievable defense.

What’s interesting, though, is their path to Chicago as opposed to a different suitor on the West Coast.

NBA legend Magic Johnson made it public earlier this season that DeRozan was interested in joining the Lakers for the 2021-22 campaign. Los Angeles decided to go in another direction, however, after LeBron James talked with Russell Westbrook.

Westbrook wound up landing a deal with the Lakers while DeRozan made his way to the Windy City.

Caruso, who was a member of the Lakers last season, was shown the door with the organization not willing to open up their wallets in free agency. It could’ve had something to do with the $45 million per year price tag of the newly acquired Westbrook. He, too, landed in Chicago.

Westbrook’s struggles in LA were well-documented. Caruso and DeRozan, meanwhile, had the Bulls near the top of the Eastern Conference standings for most of the year.

Seeing that success, it’s hard to wonder what the Lakers would’ve looked like had they been able to bring both players to Los Angeles this season.

The Lakers missed the NBA Playoffs this year after finishing 17 games below .500. A preseason championship favorite, they’ll certainly go down as one of the biggest busts in NBA history.

But things could’ve been different, which has led sports journalist Skip Bayless to criticize LeBron for choosing Westbrook over DeRozan and Caruso.

I just watched two guys who should've been Lakers – DeRozan and Caruso – take the Bucks to the wire in Milwaukee. Yet LeBron wanted Westbrick and his two guaranteed years of $44 and $47 million. Franchise-wrecking decision.

That $45 million price tag is way too high for what they’re getting out of Westbrook at the moment. The team could’ve held on to some of its young core rather than go for a flashy name.

With Caruso and DeRozan on the floor, LA more than likely makes the playoff field. Instead, it’s the Bulls that are reaping the benefits of the two talented players.

Chicago will try to get a win in game two on Wednesday. Los Angeles will have to watch from home and wonder what could’ve been.