Skip Bayless Could Return To ESPN, Rejoin Stephen A. Smith On ‘First Take’ 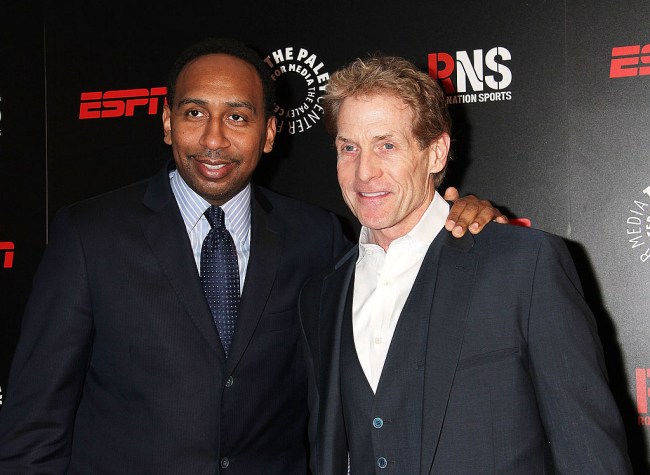 It’s been over three years since Skip Bayless sat across from Stephen A. Smith on ESPN’s ‘First Take,’ but according to a report, there could be a reunion in the near future.

According to Front Office Sports, the duo is poised to pull off a return together as Bayless’ contract at Fox Sports expires in 2020.

“They both want to make it happen. I’m just not sure ESPN will hit Fox’s number,” said one source.

However, another source said the mantra of Mark Silverman, Fox’s president of national networks, has been cost control. Disney’s ESPN, on the other hand, is still willing to break the bank for on-air talents who move the needle.

Warned one TV executive: “The era of modern sports talent is here. The top 1% will make the big money. The middle will go away. And low paying talent will fill out the grid.”

Bayless was lured away from ESPN to Fox Sports with a four-year deal worth a reported $25 million averaging a little over $6 million per year back in 2016. One would imagine he’d be looking for a pay increase after the news of Smith recently signing a new deal seeing him make just under $8 million per year becoming the highest-paid sports personality at ESPN.

Bayless has found moderate success at Fox Sports debating Shannon Sharpe on ‘Undisputed,’ but the show hasn’t done near the same numbers as what he and Smith pulled during their time at ESPN together. Bayless’ FS1 show draws in a reported 150,000-1800,000 daily viewers while ‘First Take’ averages 400,000-500,000 daily viewers.

Smith and Bayless headlining their own shows on separate networks has been fine, but there’s no denying that if the popular duo reunited on ESPN for another go-around on ‘First Take’ then the morning sports debate world would yet again be at an all-time high both viewership wise and in the pocketbooks of both co-hosts.

I think most would agree that if all of this does fall into place, the two would sit back in their chairs on the ‘First Take’ set and it wouldn’t feel like the two had ever split. We need Smith ripping Bayless and his Cowboys on our television screens again if we’re being honest.