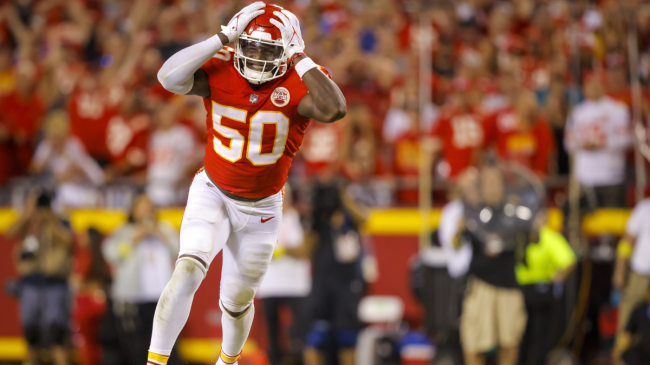 Chiefs fans are reacting to the recent suspension handed down to linebacker Willie Gay. The defender was suspended for four games due to an arrest stemming from an incident in January.

That arrest was due to an altercation with the mother of his three-year-old child in which Gay is alleged to have perpetrated a misdemeanor property damage totaling “less than $1,000.”

Here’s more from that January incident from ESPN.

A police report estimated the total property damage at $225 for a vacuum cleaner, cellphone screen protector, humidifier and damage to a wall and door frame.

The Class B non-person misdemeanor “constitutes a domestic violence offense,” according to court records.

The suspension will keep Gay out through Week 6 of the NFL season. The Chiefs will face a brutal stretch against the Colts, Bucs, Raiders, and Bills during that time, and they’ll do so without a key piece of their defense. Through two games, the linebacker had tallied 16 tackles (2 TFL) and a pair of defended passes.

While the incident can constitute a domestic violence offense, there was no physical contact between Gay and the mother of his child. With that detail being known, many believe the suspension to be too harsh compared to others that have been handed down in the NFL.

Take a look at some of the reaction on social media.

Many Chiefs fans compared the situation to that of Deshaun Watson and Alvin Kamara.

Alvin Kamara gets to play the whole season without any repercussions fir his battery charge after he and his crew beat a man to a pulp, in an elevator. Someone make it make sense.

This fan compared Willie Gay’s suspension to that of Mike Evans, who was recently punished for an on-field altercation with Marshon Lattimore.

Chiefs fans are certainly upset to lose a major part of the defensive unit. We’ll see how the defense performs when going against the likes of Tom Brady, Josh Allen, Derek Carr, and Matt Ryan without Gay in the lineup.