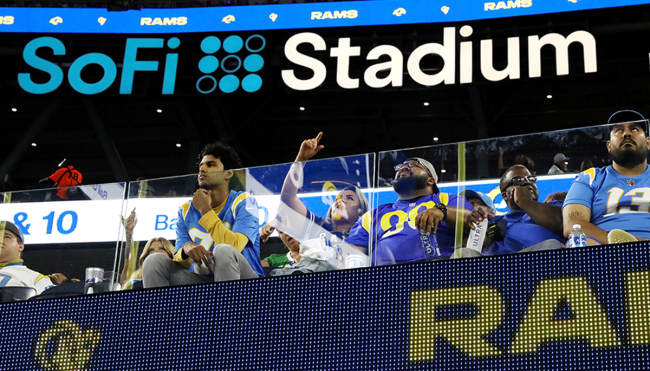 Last year, SoFi Stadium officially opened up its doors to welcome the Chargers and the Rams, finally giving the two NFL franchises a real, actual home in Los Angeles after each team spent a few seasons biding their time at other venues in the city as they waited for construction on the massive complex in Inglewood to wrap up.

Fans of both squads were forced to watch them play the inaugural season from afar for reasons you’re all too familiar with by now, but over the weekend, almost 69,000 spectators entered the turnstiles at SoFi Stadium to get their first taste of the new facility when the Rams and the Chargers faced off in a preseason contest on Saturday.

Those in attendance were also presented with the opportunity to get a literal taste of the fare being dished out at the concessions stands as part of the highly-touted “LA Eats” program, as the stadium is home to a number of unique culinary concepts whipped up by a couple of James Beard Award recipients who drew inspiration from the city it calls home.

Unfortunately, their big reveal didn’t seem to go as planned, as SoFi Stadium’s food found itself going viral for all of the wrong reasons after pictures of the incredibly sad pieces of pizza being sold for $15 a pop started to make the rounds.

However, that pizza looks downright delicious compared to some of the other food options that were showcased in a tweet from Arash Markazi, including a couple of sandwiches that look about as appetizing as the ones served up at Fyre Festival and a hot dog that was apparently cooked by someone who’s never cooked a hot dog before.

There was a lot made of the $15 pepperoni pizza at SoFi Stadium but it was a bigger issue than that. The prices and appearance of many of the food options at the stadium left many fans upset. Here's a look at the Hot Dog, Marinara Pizza, Cheeseburger Sub and Veggie Burger Sub. pic.twitter.com/xUNiN085AJ

It’s unclear how much those other items sold for, but unless they were paying people to eat them, I can safely say they were charging too much.