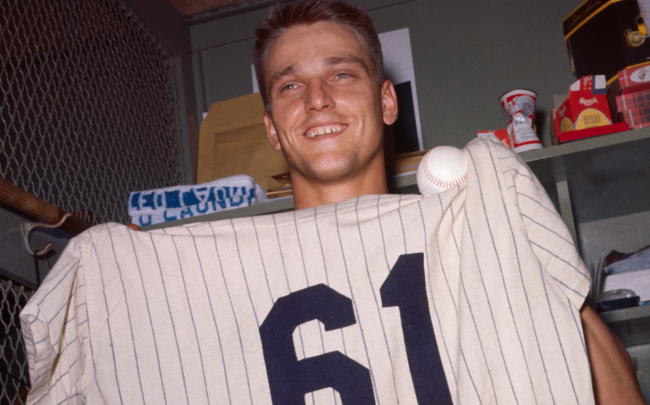 That blistering pace, should he be able to keep it up for the entire year, would give him 63 home runs on the season.

The record for most runs in a season is 73 by Barry Bonds in 2001. Mark McGwire is second and fourth on the list with 70 and 65. Sammy Sosa is third, fifth and sixth with 66, 64, and 63. None of those marks actually count though in the minds of many a baseball fan.

Of course, much like Bonds, Sosa and McGwire’s marks, the 61 home runs hit by Maris was also hit with a mythical asterisk back in the day because he did it in a 162 game season, while Babe Ruth hit 60 when the Major League Baseball season was just 154 games.

Either way, one of those two Yankees greats holds the “real” record for most home runs in a season, according to a large swath of baseball fans.

So, what does the son of the man many feel still holds that record, Roger Maris Jr. think about Aaron Judge possibly surpassing his dad in the record book?

“You don’t want to see anyone get it, but I’d be very happy if Judge did do it,” Maris told the New York Post on Thursday. “Dad always said records are meant to be broken. You don’t want to see dad’s record go, but if it happened, I can’t think of a better guy to do it. He’s a great Yankee. To do it in New York, how cool would that be? First we had [Babe] Ruth, then we had Dad, and then to have Judge, that would be pretty awesome. I can’t think of a better storyline.”

Maris Jr. was on hand when Mark McGwire “broke” his dad’s record back in 1999 and was happy for him, at the time. Now, after the many PED reports and allegations that have come to light over the past two decades, he still thinks his dad deserves credit.

“We definitely feel Dad still has the record and I think the court of public opinion feels the same,” said Maris. “It’s not fair to Judge or anyone else going after 61, like [Giancarlo] Stanton when he hit 59 [in 2017], it should be celebrated like other iconic milestones. It’s gonna be huge in the city of New York and if Judge hits 62 it will be amazing, but it will be a disservice that it’s not the major league record.”

Coincidentally, if Aaron Judge does reach that magical mark of 61 home runs, it will be on the 61st anniversary of Roger Maris accomplishing the same thing. And that is something that both Roger Maris Jr. and many baseball fans can definitely get behind, or, well, some of them.

If there is another member of the New York Yankees more fitting than Aaron Judge to pass Roger Maris' home run record, they either haven't graduated high school or are even born yet. https://t.co/Mz2fFtVirs

I agree, Maris holds the REAL and TRUE record. Same goes for Aaron

Still don't know how Bonds record is tainted, no one can say when he supposedly used. Even the government couldn't prove anything

Imagine ever thinking Roids Bonds has the record 😂😂. Y’all were just born stupid