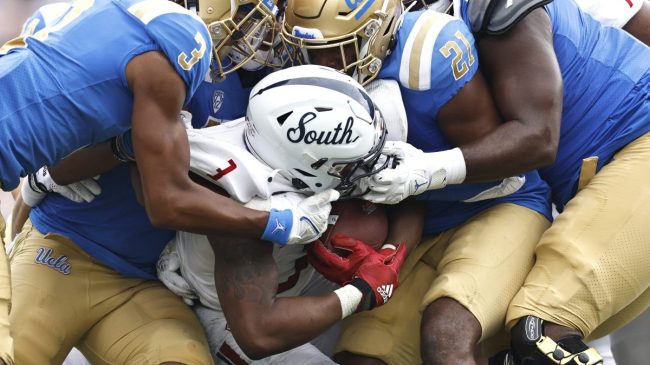 The UCLA Bruins moved to 3-0 in the 2022 college football season on Saturday. The Bruins topped Sun Belt foe South Alabama, 32-31, in front of yet another laughable crowd at the Rose Bowl.

But it wasn’t without some help from the Jaguars.

South Alabama led 10-6 after the first quarter and took a 17-13 lead into the break. The Jaguars extended that lead in the third quarter and look in a good spot to come away with the victory.

But then USA head coach Kane Wommack made a decision that he’s probably going to wish he’d had back.

The Jaguars held a slim 31-29 lead with just over three minutes remaining in the fourth quarter. Faced with a fourth-and-2 from the UCLA 23-yard line, Wommack sent out his field goal team.

South Alabama initially lined up in a field goal formation before flexing out into a heavy shotgun formation. From that point on, nothing went according to plan.

WHAT ARE YOU DOING pic.twitter.com/iW05Kcbbr6

South Alabama quarterback Carter Bradley took the snap, ran right, and looked to pass before tucking the ball and running. Tanner McGee then sacked Bradley back at the 34-yard line and UCLA took over on downs.

The Bruins proceeded to march 61 yards in 10 plays and 2:52. Nicholas Barr-Mira then drilled a 24-yard field goal as time expired to give the hosts a walk-off, 32-31 victory.

But all anyone could talk about after the fact was whatever South Alabama was trying to do on fourth down.

One of the worst decisions in college football history. https://t.co/mBkElamofZ

My stomach hurts watching this. Love that Fun Belt spirit, though. https://t.co/6HUGjcJXCY

Wommack now has a nice cross-country flight back to Mobile, Alabama to think about his decision.