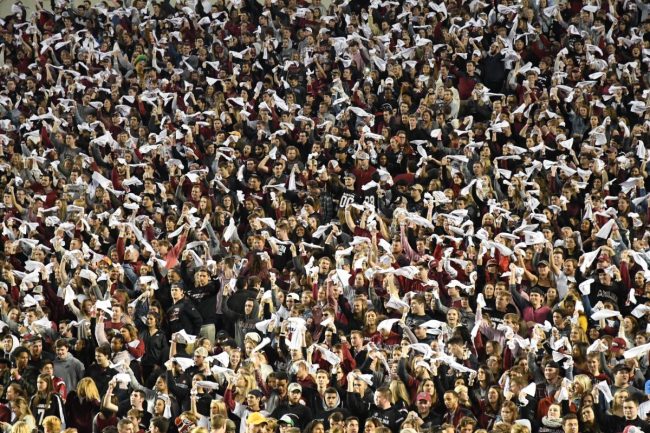 The South Carolina football team is gearing up for its Week 1 matchup against Georgia State on September 3rd as they look to improve upon a seven-win campaign. But it’s not just the team that is prepping for that season opener.

The A/V team is also looking to make a statement in Columbia for that first matchup, and it’s sure to have fans going bonkers before the opening kickoff.

South Carolina released a preview of their new LED lights, which will make their debut this year. That preview showed what the stadium lights will look like when the crew plays “Sandstorm” for the first time.

The Gamecocks’ “Sandstorm” tradition has been voted one of the best in the SEC, but this takes it up a notch. Fans will legitimately think they’re at a rave when the techno beat drops. It’s sure to create a raucous environment in Williams-Brice Stadium this year (though if you ask some of their rivals, that crowd might only be rowdy through the first half or so).

Jokes aside, this has Gamecock fans pumped up for that Week 1 opener in Willy B. Take a look at the immediate reaction on social media.

South Carolina fans were quick to react to the light show preview, and many are ready to run through a wall to get their seats for the opener.

Let’s GO! The Willy B will be extra 🔥 on September 3rd! #Gamecocks https://t.co/gim0krhEXl

A few fans from the opposition might even enjoy the show.

Okay this is gonna be freakin awesome, I can’t lie @SSN_Gamecocks https://t.co/cLWrQ6wpcn

The Gamecocks kick off the season on September 3rd. The first time these lights drop, it’s going to be absolute mayhem.