College Football Site Ripped For Its Ranking Of SEC Traditions, Placing ‘Sandstorm’ At No. 1 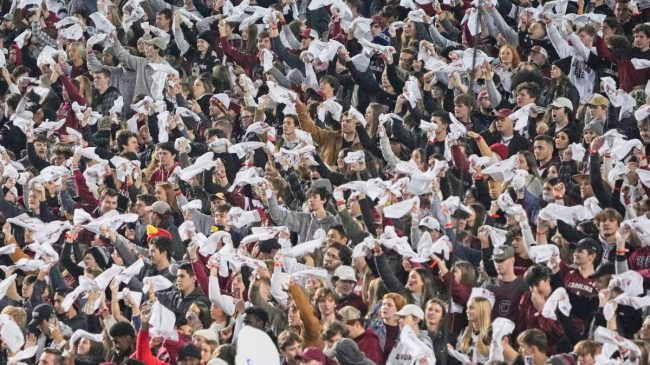 The SEC is college football’s top conference. Not only does that status come from its performance on the field, but it also stems from the never-ending list of traditions.

You’ve got Hoddy Toddy, Calling the Dawgs, WPS, Rammer Jammer, and more. Where else will you find places like The Grove, The Cockabooses, and The Vol Navy’s Tennessee River locale?

These traditions are what make the league, and football in general, fun for fans and alumni. But one notable SEC website is taking heat for its ranking of the top pastimes from conference affiliates.

Saturday Down South revealed its top five SEC tradition on social media Thursday as a way to pass time during the lull of the college football offseason. Fans are questioning their choices on Twitter.

As a South Carolina grad, I’m excited to see my Gamecocks sitting at the top of the standings for a change, but even I can’t agree with ‘Sandstorm’ landing the top spot. Hell, it’s barely a decade old, and while it created one of the most raucous environments I’ve ever been a part of in that 2009 win over Ole Miss, it shouldn’t be on the list.

Frankly, the 2001 Entrance is much better and is a tradition that dates back to the 1980s.

As for the others on the list, I’ll leave the commentary up to the SEC fans.

Football fans weren’t too keen on the rankings. Take a look at the social media reaction.

Ah yes, piping in Danish EDM from the late 90s. A tradition like no other. https://t.co/v48onkgsWW

Texas A&M caught flak for being in the SEC an even shorter amount of time than ‘Sandstorm.’ The Mississippi State cowbells weren’t well received either.

The cowbells are hands down the literal worst thing in America. https://t.co/IxisKfOEiE

There seemed to be a different tradition suggested for Tennessee…

Tennessee constantly hyping themselves up just to choke yearly… https://t.co/NOwprY9C40

Of course, a new tradition could soon arise with a few new members joining the conference.

This list definitely had a few question marks. What’s your vote for top SEC tradition?