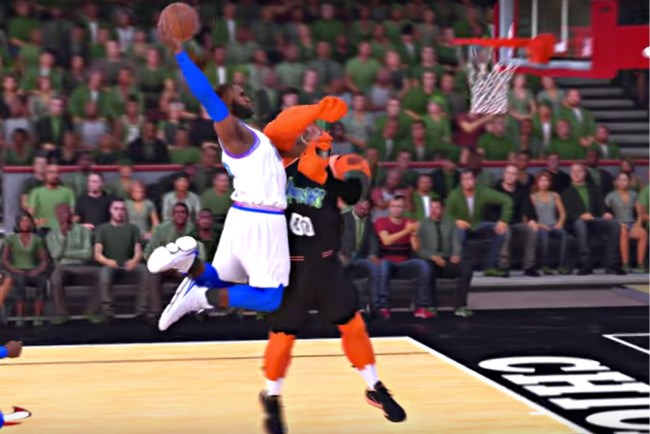 Space Jam 2 is set to start filming this summer for a scheduled release for July of 2021, and, while LeBron James is reportedly having a difficult time tracking down other NBA stars to appear in the movie alongside him, one creative guy decided to take matters into his own hands. That’s because a YouTube user by the name of Shady000018 didn’t just decide who he thinks should be in the movie, but he actually created a homemade trailer for Space Jam 2 by using graphics from the video game NBA2K.

With James leading his Tune Squad against the Monstars, the fan-made trailer shows the Los Angeles Lakers star alongside guys like J.R. Smith to take down the bad guys — which features players like JaVale McGee, Isaiah Thomas, DeMarcus Cousins, Draymond Green and Carmelo Anthony. Take a look below and decide for yourself if this thing brings more hype to the soon-to-be-filming flick.

While this mock trailer definitely gets me a little bit more excited about the possibilities of Space Jam 2, I’m going to give my unpopular opinion: I don’t want the movie to happen. I know, some people think that LeBron James is perfect to take over the leading role that Michael Jordan played in the 1996 original Space Jam, but I’m not one of those people. Some things are meant to just me left alone and remain sacred, and having the Tune Squad try to take down the Monstars is one of them, in my opinion.

With all that said, I don’t have much fight in the whole thing, because Space Jam 2‘s already confirmed and James and his gang of tunes and NBA players are filming this thing in the coming months. Problem is, who the hell wants to do it with him? And, if the other players are washed up dudes like Dwyane Wade, will anyone really care enough to see it? Regardless of the finished product, at least the trailer above gives us some hope that, just maybe, this thing could turn out OK.