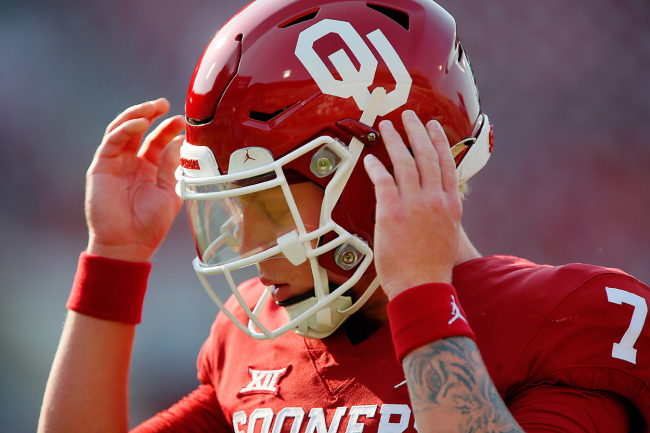 Spencer Rattler’s time at Oklahoma was the definition of tumultuous. After arriving on-campus as a five-star recruit, the Arizona-native sat behind Jalen Hurts as a freshman before redshirting and leading the Sooners to a Sugar Bowl win in year two.

It was all downhill from there. Year three did not go as planned.

As a redshirt sophomore in 2021, Rattler began the year as the incumbent starter. Not long into the season, his own fans started booing him and chanted for his backup, Caleb Williams, to enter the game.

Riley stuck with Rattler for the time being and Oklahoma went 5-0 to begin the year, but close, one-possession wins came against four of five opponents. The fifth was an FCS program.

And then, after falling behind 28-7 in the first half against Texas, Riley pulled the hook. Out came Rattler, in went Williams— who led the Sooners back from the largest deficit in Red River Shootout history and then remained the starter for the rest of the year.

From the Longhorns game forward, there was clear, definitive tension between Rattler and his teammates, the coaching staff, and the fans. He was destined to transfer and that’s exactly what he did after the end of the regular season.

Since then, Rattler has committed to South Carolina and is settling-in nicely according to all reports from Columbia.

However, Rattler is still holding a bit of a grudge against Oklahoma, Riley and all of those involved with how 2021 went. In a profile with ESPN’s Chris Low, the 21-year-old quarterback aired out some of his grievances.

He made it clear that he did not feel wanted in Norman, called the situation toxic and said that “anywhere” was going to be better than Oklahoma.

“A lot of guys don’t get another chance, to start over where they’re really wanted,” RattIer said. “I was just happy to get away from a toxic situation and get somewhere new. Anywhere was going to be better, and I found the right place.”

When asked to elaborate, Rattler gave some, but not much context.

“That will be a story for later,” he said. “I don’t want to get too in depth with it, but it was out of my control. All I can tell you is that we were undefeated at the time I was benched. We won a championship the year before and were going to win another one. I could go on and on.”

“We had a great summer and then once the season started, we had a competitive first couple of games and didn’t play up to par. I just feel like we weren’t given enough time to jell together during the season. Triggers were pulled too quick, and because of that, we lost two games and didn’t win another championship.”

“But, like I said, that was out of my control. I gave my all with my teammates and for the real coaches up there.”

While Rattler is not wrong that Oklahoma was undefeated when he was benched, the Sooners were losing by three scores to their cross-state rivals in the first half. So there is that.

In addition, Spencer Rattler was quick to defend himself after character concerns (whether rightfully or not) have followed him throughout his career in high school and at Oklahoma.

“A lot of people like to criticize me based off a reality TV show when I was teenager,” Rattler said. “I can see what they are thinking, but a lot of those people aren’t athletes and don’t really understand the competitive side, that there’s not a lot of difference between being confident and being cocky. But I was never a bad teammate, not once in my life.”

Rattler will enter the 2022 season with high expectations. After being in the preseason Heisman Trophy conversation last year, he will look to return himself to that discussion and lead South Carolina back to national relevance.