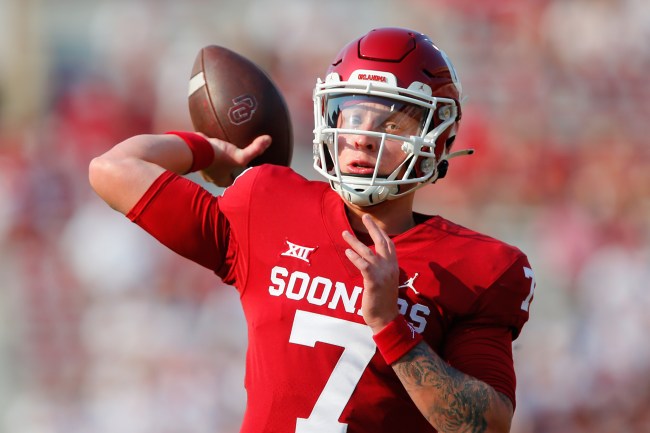 Former five-star quarterback recruit Spencer Rattler’s strange journey out of Oklahoma came to a conclusion on Monday night. The redshirt junior committed to South Carolina and will try to reestablish his NFL Draft stock in Columbia next season.

Mike Giovando is an Arizona-based private coach, trains in Phoenix, and has worked with Rattler for the last 10 years. He spoke with the Charlotte Observer about Rattler’s commitment to South Carolina and offered insight into how it lined up.

Although Rattler himself has not spoken publicly about the decision, if there is someone who can speak knowledgeably, it’s Giovando. He knows Rattler as well as anyone and better than most.

The exact timeline is unclear, but everything came together very fast.

Rattler entered the transfer portal immediately after the regular season and took exactly two weeks to commit. He reportedly met with the Gamecocks staff over Zoom last week but has yet to visit the campus.

As rumors swirled, head coach Shane Beamer and his assistants thought that they fared well. Prior to being hired at South Carolina, Beamer was the assistant head coach at Oklahoma. He and Rattler had developed a rapport in Norman and reuniting in Columbia could be an easy decision that gave him the opportunity to play at an SEC program right away.

“That familiarity definitely helped out,” Giovando said. “It helped to have that little bit of comfort with the guy that you have the potential to be playing for. You kind of know what (Beamer) is all about.“

Although the decision made sense for a lot of reasons, reuniting with former Sooners assistant head coach Shane Beamer made sense. However, according to his long-time quarterback trainer, Rattler’s decision was largely because of a different member on the Gamecocks staff.

Satterfield was hired by Beamer in 2021 and is considered one of the top up-and-coming offensive minds in the game. Prior to his first year at South Carolina this past season, he worked closely under Matt Rhule at Temple, Baylor and the Carolina Panthers.

The 45-year-old runs a pro-style offense with quarterbacks needing to push the ball down down the field successfully. It isn’t necessarily a West Coast scheme, which relies more on dinks, dunks and getting the ball out of the quarterback’s hands fast.

Instead, Satterfield’s offense is uniquely his own. It combines a lot of what the Packers are doing with Aaron Rodgers, Devante Adams and Aaron Jones, some of LSU did in 2019, a hint what P.J. Walker did at Temple in 2015 and touch of what the Panthers did in 2020. He also sprinkles in a little bit of what Oklahoma did under Lincoln Riley.

Regardless of what it looks like or what you want to call it, Satterfield’s scheme is very NFL-esque and allows a quarterback to dictate a lot of what happens on the field. Rattler, who will more than likely spend only one year with South Carolina, is hoping to rebuild his draft stock after his struggles with Oklahoma in 2021.

Playing in Satterfield’s system allows him to show exactly what he can do on the next level. According to Giovando, it was the biggest selling point.

“The lingo, the plays, the schemes, everything about what Coach Satterfield does is based on the highest level of NFL football,” Giovando said. “I think Spence thought that was important as well. (He wanted) to get into a scheme and in a system that’s going to help (him) translate to the next level when (he) gets that opportunity.”

Rattler wants to be a first round pick.

As a former No. 1 overall quarterback prospect, Rattler is the highest-rated player at his position to ever commit to the Gamecocks. He threw 39 touchdowns in 20 games under Riley at Oklahoma but was caught up in a tumultuous situation in 2021.

After four one-possession wins in the Sooners’ first five games, Oklahoma fell behind 28-7 early in the first half against Texas. Riley went to the bench and turned to true freshman quarterback Caleb Williams, who led the largest comeback in Red River Shootout history.

From that point forward, Rattler was destined to get out of Norman.

“I have my own opinion, but at the end of the day, it’s coach (Lincoln) Riley’s team, and he’s the head coach and he made decisions and that’s what he did,” Giovando said about Rattler’s benching. “(Spencer) wanted to play. He felt like he should have been playing. But he also knew, ‘You know what, if this is the way it’s gonna be, I’m going to finish this thing out and be here for the team if they need me. I’m gonna do my part and I’m gonna persevere through this. Then once this is all said and done, we get through the season, we’ll sit down and talk about — Hey, what’s the next best move?’”

Ultimately, Rattler did not regain the starting spot. Oklahoma lost two games under Williams and missed out on both the Big 12 Championship and the College Football Playoff.

Despite playing only half of the season, Rattler led the team in a few important statistical categories at the end of the regular season. He solidified himself as a Day 1 starter at his next program and that appears to be the case at South Carolina.

The Gamecocks, who went 6-16 in the two years prior to Beamer’s arrival, went 6-6 in his first year. With a favorable schedule and a new quarterback in Satterfield’s system, South Carolina could make some noise in the SEC East in 2022 if Rattler can get back to playing at an elite level right away.