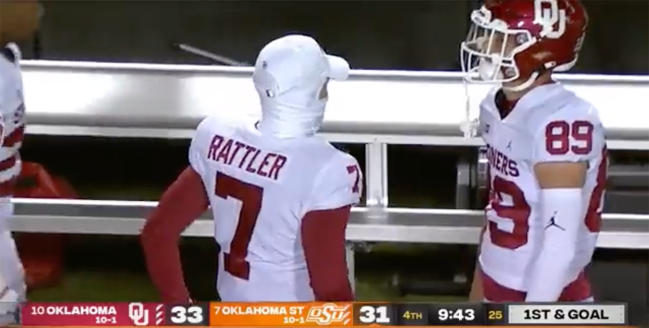 Found at sporting events, a ‘surrender cobra’ is a hands-atop-head pose that is made by fans while their team’s loss seems all-but inevitable. On Saturday night, Oklahoma backup quarterback Spencer Rattler debuted a new form of the now-famous stance.

The 10th-ranked Sooners traveled to Stillwater for the 116th meeting of the Bedlam Series against No. 7 Oklahoma State. The 2021 iteration of the in-state rivalry game came with extremely high stakes.

For the winning team, a College Football Playoff birth was not out of reach. For the loser, a two-loss Big 12 team is unlikely to make the Playoff.

It was an all-time classic.

The Cowboys jumped out to an early 14-7 lead, but the game went to halftime tied at 24. Oklahoma began the second half with a nine-point third quarter and carried a 33-24 lead into the fourth quarter.

However, at that point, any life for the Sooners completely stalled. Oklahoma State scored 13 unanswered points in the final fifteen minutes and won the game.

With just under 10 minutes left in the fourth quarter, the Cowboys lined up to boot it away after a three-and-out. Oklahoma’s return man fumbled the punt and Oklahoma State recovered with great field position.

After the blunder, the ESPN cameras cut to Rattler on the sideline. Unknowingly, he debuted the “Surrender Rattler,” as in, the Surrender Rattlesnake. The pose, a Surrender Cobra, was created in its new form as Rattler assumed the hands-on-head position.

The Cowboys went on to score the eventual game-winning touchdown and win the game. Rattler, meanwhile, is almost certainly going to transfer.