A Sports Gambler Got Lucky AF And Parlayed A $100, 10-Game Ping Pong Bet Into A Payout Worth Thousands 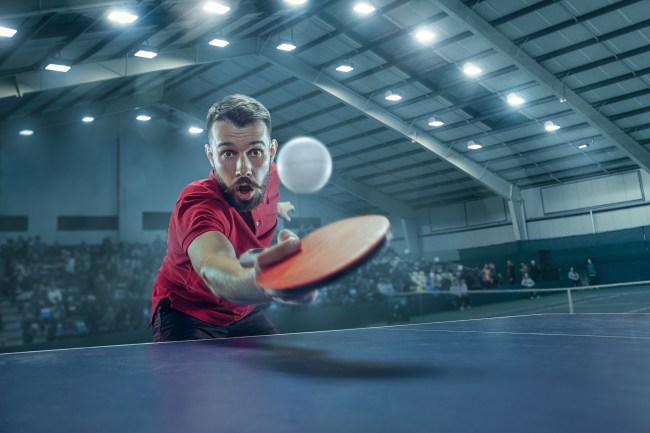 I’ve been a hopeful sports gambler about 25 times in my life, and, let me tell you, that’s about the total amount of times I’ll try my hand at betting on shit. Point blank: I’m just not very good at it, and always seem to overthink games or scenarios I bet on, and either go big or go home. I don’t play the odds well and, more than anything, I just don’t have great luck. When you put all those things together, it usually leads to me losing lots of my money — which just comes with the territory, which really sucks.

Of course, that’s not the experience every sports gambler has, as many of you guys have probably walked away winning hundreds of even thousands of bucks by betting on things. Hell, my old college roommate — who’s a huge gambler — told me he’s lost $5,000 before, but has won as much as $13,000, which just sounds both miserable and thrilling AF to me. Some people get even luckier than that, though.

For instance, take the sports gambler who recently just won a cool $25,000 on a 10-game ping pong parlay.

Given the fact mainstream sports like pro basketball, baseball and hockey aren’t happening right now, those with a gambling itch are finding other ways to scratch their betting urge — and this person landed on ping pong… in Russia!

According to the Las Vegas Review-Journal, a gambler in Nevada threw down $100 on a 10-game parlay with William Hill’s betting app — all of which were on ping pong games. Somehow, the lucky son of a bitch nailed each and every bet, walking away with $24,741.40. Not a bad way to make some cash, if you can get it.

Even the Director of Trading at William Hill, Nick Bogdanovich, couldn’t believe what had happened, and went on VSiN (a sports betting network), to express how shocked he was over the result. Take a look below at what he had to say.

“I’ve never seen anything like it in 38 years.”@WilliamHillUS continues to be shocked at the volume of bets on Russian table tennis.@MitchMossRadio @PaulyHoward #FollowTheMoney pic.twitter.com/cIsrUp3dkz

It’s one thing to be betting on shit like ping pong during a time where, literally, no other sporting events are happening because of this pandemic. It’s another thing to do so on Russian ping pong — because, really, who the hell pays close attention to that? And then it’s next level epic to turn a $100 bet into nearly $25,000 during a time when people are struggling to pay their rent. For all you sports gamblers out there, kudos to being creative, because, if winning this much cash on such a random sport were possible more often, I’d more than happily throw down a couple hundred bucks in hopes of it hitting.

There have been lots of sports gambling stories over the years that are almost too amazing to believe, but this one has to be up there for the sheer luck given both the bet, the return and the sport gambled on.