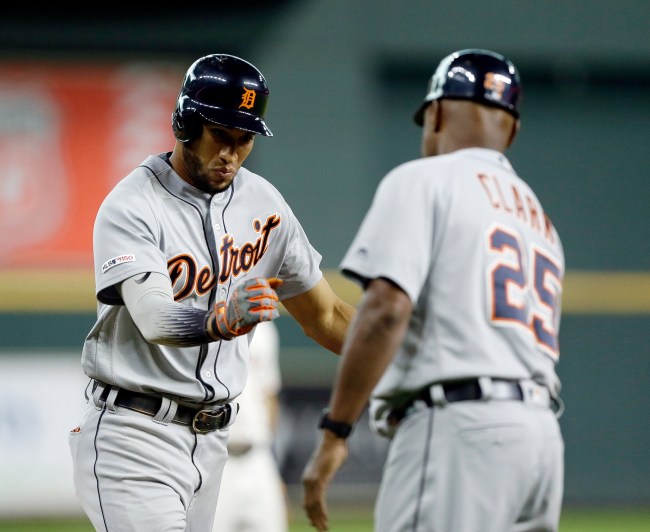 For all you sports gamblers out there, I’ll admit it, you have much bigger balls than I do.

While I watch any sporting event I can get my eyes on, one thing that I’ve never been good at, nor gotten into the hobby of doing much of, is betting on the games. I’ve done it a few times, but, damn, I’m F’in terrible at it, always losing a bunch of cash because I try to go too big or just overthink everything. Hey, it happens to all of us, right?

Sure, there are plenty of sports gamblers who have made a legit living off the hobby, I doubt I’ll ever be one of those people — and the outcome of last night’s Detroit Tigers-Houston Astros game is one reason why I refuse to ever get into the habit of tossing a bunch of money on a game I don’t have an impact on.

On paper, the Astros had every advantage. They had Justin Verlander on the bump. The Tigers have the worst record in baseball. The game was in Houston. And Ric Flair was in attendance to throw out the first pitch. Yep, everything seemed to be going against Detroit — which is why the Tigers were +435 underdogs in the game, per Caesars Sportsbook, according to ESPN. In fact, right around game time, the MGM app had the Astros at a ridiculous -770 favorite, so it’s was (perceived) to be the easiest money ever for sports gamblers; until it wasn’t.

Thanks to one of the biggest upsets in the past couple of decades, the Tigers shocked the Astros, winning 2-1. For two sports gamblers, the Detroit win proved to be extremely costly, with ESPN finding out that the Mirage/MGM took at least two bets over $55,000.

Yikes, that’s got to hurt. Of course, if you’re the type of person who has that kind of loot to bet on a late-season MLB game, the loss probably doesn’t sting as much as it would for you or I, but, still, that’s not small pennies we’re talking about.

Sure, there have been plenty of times when sports gamblers win a ton of cash by getting lucky. And, while that will continue to happen, let the outcome of last night’s Tigers-Astros game serve as a reminder that nothing is ever certain when it comes to sports, so bet wisely, dudes.