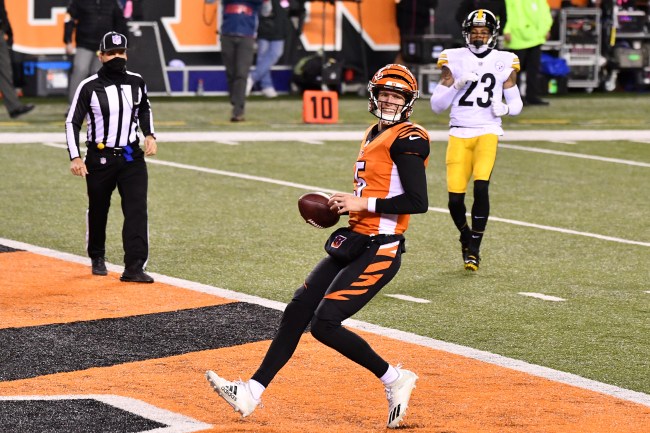 If you’re into sports gambling, and I know a lot of you are, you probably didn’t think much of the New York Jets-Los Angeles Rams or Cincinnati Bengals-Pittsburgh Steelers games this past weekend. After all, the Jets entered the Week 15 contest winless and the Bengals played a nationally-televised game with a bunch of backups (including at quarterback) against a Steelers team that was undefeated just a couple of weeks ago.

But because the sports gambling gods always find a way to really mess with people, both the Jets and the Bengals ended up shocking the NFL world by winning. How this can be explained is beyond me, but it happened. And if you were one of the very lucky (stupid?) sports bettors who actually tossed some money on it to happen, you’re undoubtedly smiling really, really big this morning.

That’s because a parlay involving just the Jets and Bengals paid big. Like… humungous. That’s not all that shocking considering the money line has the Jets  at +1100 and the Bengals  at +750. But after seeing both teams win, it’s incredible to see the payouts from a simple parlay with both teams.

For instance, as sports gambling journalist Todd Dewey mentioned on Twitter, a simple $100 parlay on the Jets and Bengals would’ve paid a cool $10,000.

You know how we’re all complaining about spending too much money on holiday gifts this year? Well a simple hundo in a parlay involving just the Jets and Bengals would’ve more than made up for any of those expenses. Hell, a simple $15 parlay with both teams paid out a cool $1,100, per FanDuel.

One customer placed a $15 parlay on Jets & Bengals moneyline.

It’s times like this where I look at myself in the mirror and think, “dude, you should’ve just swung for the fences here.” Obviously, hindsight’s 20/20, and nobody in the world would’ve guessed that the Jets and Bengals would’ve ended Week 15 victoriously. But, damn, isn’t this what makes sports gambling so awesome? Because had you been ballsy enough to drop just $15 on a parlay with just these two teams — otherwise known as the cost of a hungover brunch — you would have over a grand to show for it. Yeah, life’s not fair sometimes.