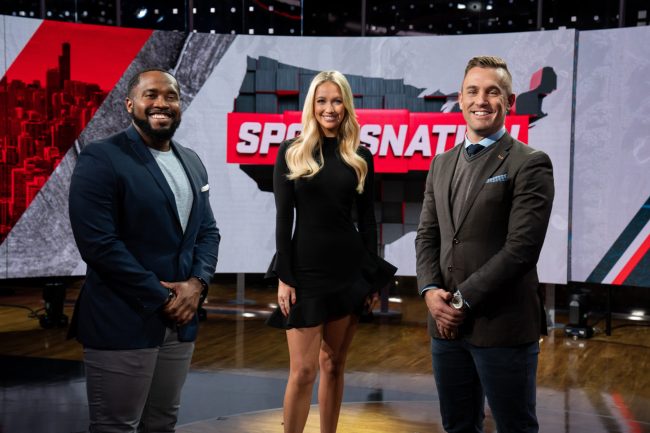 Most of us remember the show SportsNation on ESPN that ended back in 2018. You know, it was the one that launched former hosts into stardom and had a fun atmosphere that even included guys like Rob Gronkowski playing a giant game of flip cup on set; and then promptly destroying everything in sight. It was exactly what a sports show should be — and utilized fan engagement in a pretty unique way. Even today, sports fans lack such a show.

Gronk just lost in Giant Flip Cup so now he is destroying the set!#GronkNation pic.twitter.com/iTyRbVkgUi

That’s because SportsNation is coming back with new hosts, a new set and some unique stuff to boot.

Launching exclusively on ESPN+ on Monday, January 11th, the new SportsNation will be hosted by Ashley Brewer, Treavor Scales and Taylor Twellman. The three will also have a slew of guests joining them, with new episodes dropping every weekday morning.

For those who don’t have ESPN+, make sure you grab a subscription. Not only will the updated SportsNation be available to stream each morning, but the service has loads of sports content to hold you over till the warmer weather comes around in a few months.

Oh, and shout-out to my best friend — who, to save him the embarrassment, I won’t name drop — for being part of the show. He’s given me the inside scoop over the past month as they went through the crazy process of relaunching SportsNation, making me use the “Best Friend Oath” to keep it all a secret. But, trust me, from what he’s been able to tell me, it’s sure to be every dude’s favorite way to consume sports each day.

Offering recaps of sports highlights through debates and reactions from social media, SportsNation is the hottest new spot for both diehard and casual sports fans. And it’s only available on ESPN+, so don’t miss out on the soon-to-launch party.