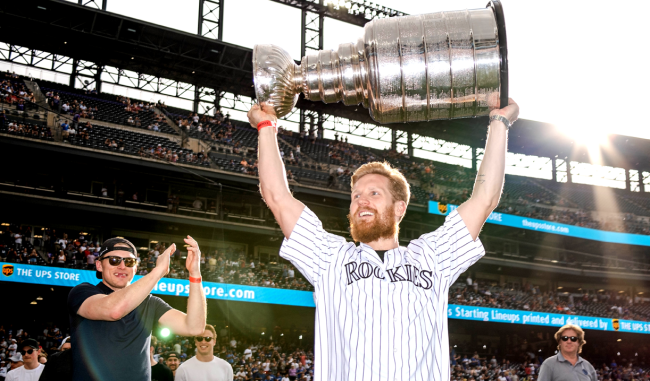 Gabriel Landeskog of the Colorado Avalanche had a great time with the Stanley Cup prior to the Colorado Rockies game against Los Angeles Dodgers in Denver on Thursday.

He almost didn’t get to celebrate with the Cup at Coors Field though as it was mistakenly delivered to a couple in Denver the day after the Avalanche defeated the Tampa Bay Lightning for the NHL championship.

Instead of showing up at Landeskog’s home, the Stanley Cup ended up at the home of Dmitri Rudenko and his husband, Kit Karbler.

“I was the first one who saw the car being parked in our driveway. I saw the car backing up,” Rudenko told NBC 9 News.

“The person opens the trunk and I saw the case and I recognized it, because I watched the final games,” he said. “Jokingly said, ‘Is that the Stanley Cup?’ And he says, ‘Yes!'”

Landeskog apparently lives in the same part of town as the couple and has a similar address.

“They’re only one digit off,” said Karbler. “Because of that one digit, it was fortuitous for us!”

Because the Stanley Cup was delivered to the wrong address, Rudenko and Karbler each got to see the trophy, touch it and take pictures with it in their driveway.

“He opened it up all the way, said go ahead. I lifted it up. I couldn’t believe how heavy it was. I ran my fingers over the engraving,” Karbler told Fox 31 News.

The Hockey Hall of Fame’s Keeper of the Cup, Philip Pritchard, admitted, “We couldn’t really see the number of the house, so I said we’ll just go up and knock, what’s the worst thing, they say, ‘Hi, who are you guys?’ Sure enough, I knock, ‘Hi who are you guys?’”

“I couldn’t believe it!” said Karbler. “All my thoughts were wide open because how could that be? Because I knew that we had Avalanche players that lived in the neighborhood but I didn’t know how close.”