Amazing Statistics Reveal Just How Inept The Browns Have Been, Plus The A+ Reactions To Their Tie 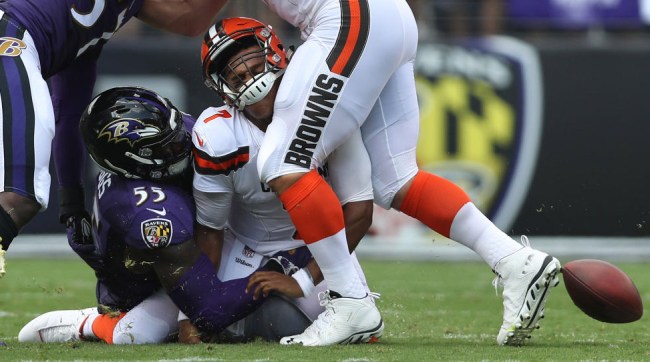 For the first time since December of 2016, the Cleveland Browns did not lose. Unfortunately, I guess, they also didn’t win. They tied. Of course, being the Browns, they also managed to add to a statistic that shows just how bad the team has been.

Not that there is any shortage of stats to show how bad the Browns have been, but after Sunday’s tie versus the Steelers this particular statistic is pretty unique.

On Sunday, the Browns forced the Steelers into a very impressive six turnovers. Six. And, being the Browns, they still weren’t able to win. Which, in the history of the NFL, is not an easy thing to do.

Of the last 137 teams to cause five or more turnovers in a game, 132 (or 96.4%) came away with a victory, four lost, and one tied. Out of those four losses and a tie, the Cleveland Browns are responsible for two of the losses, and, of course, the tie. Amazing.

The Browns are +5 in takeaways today. Since the Browns returned to the NFL, teams with a turnover margin of +5 or better in a game are 132-4-1. The Browns are responsible for two of those losses and the tie.

But hey, it was a moral victory, right? After all, this tie gave the Browns their best start to the season since 2004.

“You get six turnovers, you think you have a chance that you should win the game if you turn it over one time. You are plus five [in turnover margin]. I am impressed with what they did in that way,” said head coach Hue Jackson after the game. “There are some others that I am sure we are going to feel like we had opportunities, too. We just have to keep getting better.”

Offensive lineman Joel Bitonio echoed Jackson, saying, “The defense did a great job of getting us the ball, and we did not do enough to score. When you get six takeaways, you expect to win the game and the turnover battle. That is something we have to improve on. It is hard to tell now what broke down on every play, but it is something that we will definitely be working on.”

So, all in all, Sunday was a good day for the Browns, right? Right?

Got the new banner up in Cleveland… 😂#Browns #Steelers pic.twitter.com/UF6b1FGxaT

The Cleveland Browns have a better record than half the NFL! What a time to be alive !!

you gotta tie before you can run

Well, the Cleveland Browns did beat the point spread. https://t.co/AdG2yg4rT1

Congratulations to the 2018 Cleveland Browns on not going 0-16

@Browns I think we all need this shirt. pic.twitter.com/0OEcxlJMU9

Only the @Browns could end a losing streak without actually winning