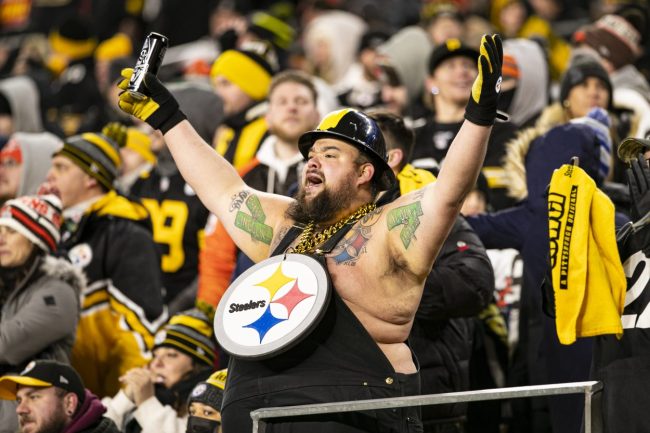 Emotions were running high at Heinz Field following Ben Roethlisberger’s final home game. After the Steelers beat the Browns by 12, Big Ben took some time to soak in the moment and stayed on the field with his family until he was ready to head back into the tunnel and go home.

He definitely milked it, but after his career it was well-deserved.

As Roethlisberger made his way around the stadium to thank the Pittsburgh faithful who had supported him throughout his career, one of the fans in attendance tried to join him. It just didn’t go very well.

The fan, by the name of Tommy Messina, recently posted his attempt on TikTok. Although he tagged the video with #streaker, because the definition of a streaker has lessened throughout the years, Messina was fully clothed.

(Messina is not the fan in the photo above. That is Big Ed Vega, a Steelers legend)

He hopped the fence on the sideline around the 20-yard-line and took off toward the field of play.

But Messina didn’t quite make it.

Messina barely made it onto the grass before a pair of security guards closed in. He split the defenders, but both of them got a had on him to trip him up and slow him down.

As a result, while he tried to recover and regain momentum, a third security guard closed in and laid the wood on Messina. The other two security guards then returned to their feet and piled on top of Messina, who fell just short of making it past the sideline.

It is unclear as to whether Messina was arrested for the failed attempt. Either way, it must be heart-breaking to fall inches short of the gridiron.

Regardless of if a streaker gets loose and spends a significant amount of time evading security, it can be counted as a small win if he/she makes it onto the field. Messina came unbelievably close, but was stopped at the goal line.