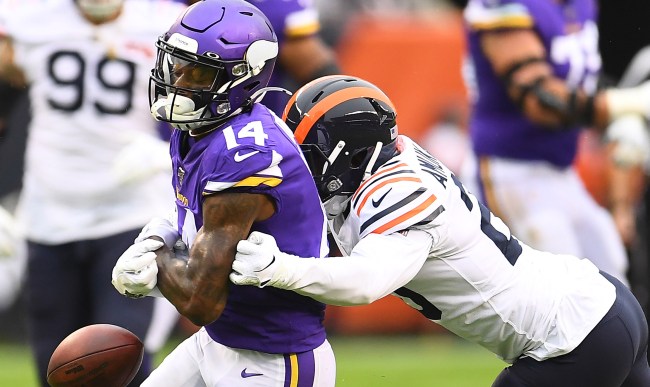 The Minnesota Vikings are heving themselves one heck of a week. First we had Adam Thielen taking a not-very-veiled shot at the team’s $84 million quarterback Kirk Cousins after an ugly loss to the Bears. Then we had Cousins issuing an apology to Thielen for being bad at playing quarterback this year. And then we had Stefon Diggs not showing up to practice after sending a cryptic tweet, sparking all sorts of trade rumors.

Those trade rumors have included Washington after Diggs’ brother posted a picture of Stefon wearing a Redskins jersey on social medai, Buffalo after Diggs started following a bunch of Bills players on Instagram and New England, because of course New England.

On Thursday, Diggs was asked about all the trade speculation surrounding him during a contentious media session at the Vikings’ practice facility, and he responded that “there’s truth to all rumors.”

What that means exactly is open to interpretation because Diggs wouldn’t shed any more light on the topic.

As for why he missed practice on Wednesday without any explanation, Diggs said he wasn’t feeling well and hopes to play Sunday against the Giants.

“The space that we’re in right now is definitely is a lot of questions,” Diggs added. “I can’t sit up here and act like everything is OK because obviously it’s not but I can say at this point I’m just trying to work through it.”

Stefon Diggs on rumors that he wants to be traded:

“I feel like there is truth to all rumors. You know, no matter how you dress it up. I won’t be speaking on that at all.” pic.twitter.com/xUO5homKyw

The Vikings have already gone on record saying that they are not trading Diggs, but… you know…

Bill Belichick coming in with a 4th round pick for Stefon Diggs pic.twitter.com/SXmXTWRUGS

UPDATE: Per source, Stefon Diggs contract and Patriots cap is currently the only road block in the deal being finalized. However, the Patriots are known for restructuring – Stay tuned. #Patriots #GoPats