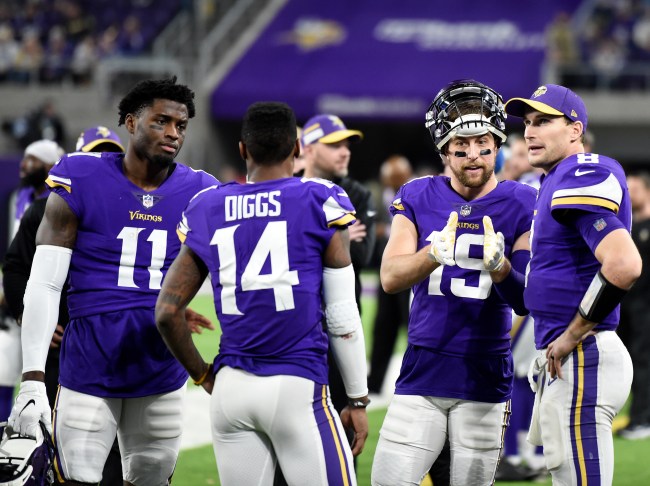 Over the same period last season, the 29-year-old had 40 receptions for for 473 yards and two touchdowns.

When you add in Sunday’s 16-6 loss to the Bears that dropped the Vikings to the basement of the NFC North and $84 million quarterback Kirk Cousins seemingly legitimately scared to throw the ball more than 6 yards, Thielen’s blood pressure’s gotta be at an all-time high.

After the loss, Thielen threw out some thinly-veiled jabs at Cousins, whose leash is shortening in Minnesota after taking over a 13-3 Vikings team and leading them to an underachieving 8-7-1 record a season ago.

Adam Thielen says the Vikings "have to be able to throw the ball…in this league you can’t be one-dimensional."

Minnesota ranks 31st in passing yards per game this year.

Thielen is 1000% right. Cousins is beginning to define himself by shitting the bed against good teams. With Sunday’s loss, Cousins falls to 4-27 in the NFL against teams with winning records.

If there’s one thing I’ve learned about the internet over the years, it’s that it will never miss an opportunity to relish in someone’s misery.

reporter caught adam thielen in the locker room after the game & asked him how he felt about kirk cousins: pic.twitter.com/u3UcFPbkBC

Kirk Cousins and Adam Thielen after next practice pic.twitter.com/nFIL5yXBQf

Next week, Cousins and the Vikings will take on a bad New York Giants defense, which ranks 23rd in the league. It’s put up or shut up time.